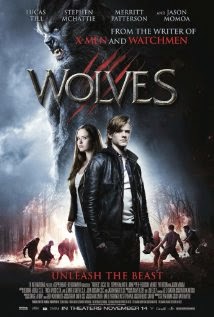 I'm generally not one for werewolf movies. I think it has something to do with the monster being human some of the time. I like my monsters monstrous and my humans monstrous without changing into a different creature altogether. Maybe I just find the whole werewolf metaphor a bit too on-the-nose.

There are exceptions of course. An American Werewolf in London, obviously. Gingersnaps. Dogsoldiers. I like these movies because their stories deal with the change and what it represents in interesting ways. David doesn't understand what's happening to him and has trouble dealing with his guilt; Gingersnaps is as much about sexual maturity as it is about subverting conformity; and Dogsoldiers is a cautionary tale about trusting women, I guess.

Wolves, David Hayter explained at the North American premier, is a kind of homage to the monster movies he grew up with. He must mean Teen Wolf because I didn't see a lot of American Werewolf or The Howling in Wolves (I've yet to watch In the Company of Wolves because I'm scared of the box art). And even though he's too old to have grown up reading young adult fiction, Wolves reads more YA than it does straight-up monster movie.

Looking back over his writing career, it's easy to see Hayter's influences for Wolves. X-Men and Watchmen are about special, outstanding individuals, supermen who are different from the rest of us and who sometimes have trouble with human ethics and morality. In Wolves, Cayden first struggles with being a “monster” then find peace and meaning in a new home with people who are just like him.

Star quarterback in a small town, Cayden's got everything going for him until a make-out session with his girlfriend triggers his first transformation and he turns violent. Further violence that same night prompts him to run away from home and he drifts aimlessly, not sure about himself of what he's doing. He tries to use his powers for good, but he can't control them. A chance encounter with another werewolf leads him to Lupine Ridge where he hopes to find answers. There, he finds standoffish townsfolk and more trouble, until a farmer takes him in.

Cayden's peaceful sojourn on the Tollerman farm is short-lived. Not long after his arrival he's tempted again to transform and although the experience is a positive one, it results to him learning more about his past and where he fits in with the rest of the wolves of Lupine Ridge. Cayden is even more special and important than he ever imagined and he believes he's the only one who can bring a lasting peace to the wolves of Lupine Ridge.

Wolves (much like Chronicle) is cinematic YA, which is just a way of saying the movie is best enjoyed and understood as a mature teen melodrama. Granted, there are only two young people in the movie, but that only serves to highlight Cayden's struggles; Cayden is fighting against a power greater than himself, meaning the wolfpack that lives in the hills and his own lycanthropy.

Speaking to the After Dark audience, Hayter talked about how, as a writer-director, no one other than himself is making changes to his script. One the one hand, I can understand how great that must feel, to be able to see your script made the way you imagined. On the other hand, this kind of auteurship can blind you to the problems in your story. And Wolves is not without its problems.

A big exposition dump late in the movie reveals story developments that should have been teased out over the course of the film. Nothing is gained by holding back this information from the characters. In fact, had Cayden known Connor's side of things, it would have added more depth to their relationship. Moreover, a great deal of the film's backstory involves Cayden's grandfather, who isn't present in the movie. He, in addition to Connor, seems to be the root cause of all the conflict in the story but he's not around to sway opinions one way or another. Rather, someone else in the present has gone to great lengths to manipulate Cayden but this character is so marginalized that when he makes his motivations known, it just feels tacked-on.

Everything else about the movie is well done and Hayter made of point of having his werewolves look and fight like human animals. “I wasn't going to put a snout on an actor,” he said, preferring instead a creature design that allowed his actors to emote through the makeup. Jason Momoa does such a fabulous job being powerful and overbearing in human form, the werewolf seems almost unnecessary, which is the point, but everyone else does a good job balancing their human-shaped civility with their werewolf-shaped brutality.


As a YA genre tale, Wolves checks all the boxes and will certainly delight young horror fans. Whether the film will resonate with the old school monster crowd remains to be seen. The film opens in the US and Canada on November 14.
Posted by DM at 13:45