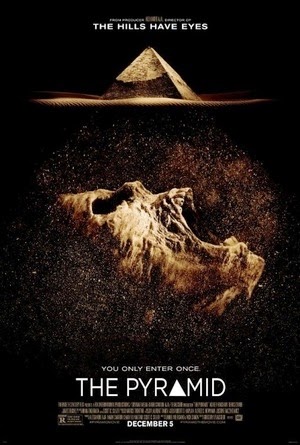 Spoiler warning: there's actually no mummy in this pyramid.

I think I just witnessed the death of found footage.

Also, the death of science, history, and common sense.

I'm no Egyptologist, but I know enough to be able to scoff at the glaring inaccuracies in Ancient Egyptian history and religion that are peppered throughout the script. And I don't mean preposterous stuff like sand traps and tiger traps hidden within the depths of a three-sided pyramid that was buried underground thousands of years before the Great Pyramid was good idea. I mean the embarrassingly (insultingly?) bungled explanation of the weighing of the heart. Also, Anubis and The Devourer are two different entities. Just saying.

But I'm getting ahead of myself.

The Pyramid is the story of a father-daughter archaeology team and a documentary crew who get lost inside the aforementioned mysterious three-sided pyramid. They encounter monsters and booby traps in their search for a way out. Also, there's some kind of horrible infection in the air or something, but that storyline is neither properly developed nor resolved. 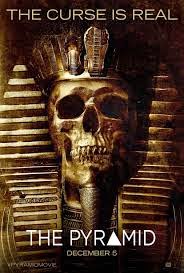 Curse? What curse? No one said anything about a curse.

Found footage is built upon a strong foundation of cinematic postmodernism. To ignore that is to admit to a fundamental misunderstanding of how the subgenre works, and the fun things you can do with it. You can be satirical and self-reflexive and meta, but The Pyramid only succeeds in being laughably inept at even the most basic principles.

Namely, this is not a found footage film even though it wants to be. Now, there's nothing wrong with making a movie in the found footage style without it actually being an epistolary document. But you can't switch back and forth between 3rd and 1st person POVs and still insist on maintaining a found footage aesthetic. It's as if the filmmakers knew their vision wouldn't work but they insisted on it anyway because found footage is hot, still. Kinda.

Worse yet, their attempts at documentary verisimilitude are painfully awkward. Remember the early mockumentaries? The ones that were so well made you could totally believe they were real? Well, this is nothing like that. Also, there doesn't appear to be any internal cohesiveness regarding the mockumentary's look and feel. In one scene, the lead archaeologist is being coached on how to respond to interview questions so as to cut out the interviewer in post, but interview is shot with two cameras. Moreover, there's no visual cue to distinguish between the documentary footage and the 3rd person POV.

So that's what's technically wrong with The Pyramid. Now let's examine the script. Right at the beginning of the movie, the script conflates research methods and interpretation. Using satellites to help you look for stuff and using that stuff to re-interpret the historical record are two different things. Yes, there are a lot archaeologists out there who'll be highly skeptical of a find that questions a well-established chronology, but no one's going to forsake ground penetrating radar for a dousing rod. That's just stupid. 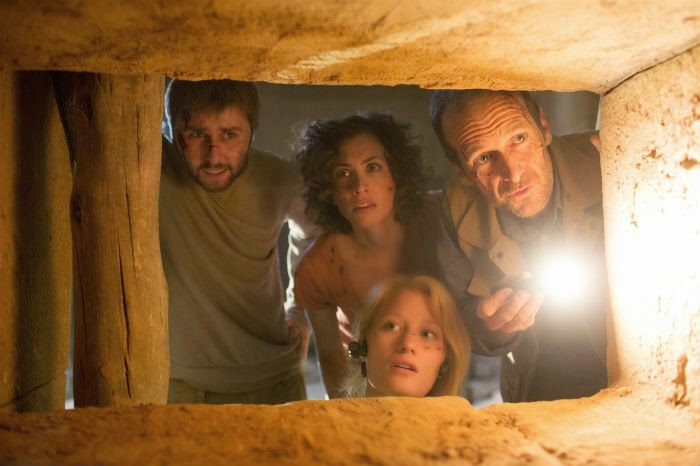 Sometimes the only way out is in. Down this tunnel of cliches.

But a lot of things about this movie are stupid. Like how an archaeological dig is even taking place at Giza during the Arab Spring. And what does that even have to do with anything? (The answer is: nothing. It has nothing to do with the story.) Or, why do the monsters attack the crew and then not attack them later on? And how could anyone possibly think that turning off the light is a good way to hide from a dark-adapted monster. This is the same monster that gets scared away by a flare later on, I might add.

Sadly, perhaps unbelievably, there's actually a cool idea buried under all the garbage. You can see it, a gleaming spark of an idea, but the script has been changed and revised so many times, so many different plot points added and removed, that the writers lost the thread.

It's a mess, is what I'm saying. The movie is so contradictory, I can't understand how anyone reading the script didn't say at some point, "Now how does that make any sense?" Was it rushed into production? Did someone owe a favour? Contractual obligation? I've seen movies that probably cost way less and achieve so much more simply because someone cared enough to take the time make sure the script was good.

And I guess that's really the heart of the matter: no one cared about The Pyramid. No one cared how it looked or if it made any sense, and still it got made. And that's why I think it heralds the death of the found footage genre.
Posted by DM at 10:48