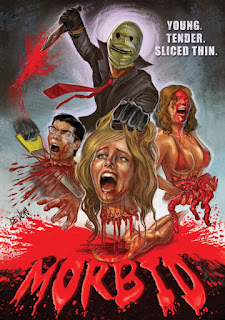 Not pictured: What actually happens in the movie.

There is a penis at the end of this review.

Fellow horror blogger Chuck Conry made a movie. Good for him! And this is where the praise ends because Morbid is a badly written and poorly paced slasher throwback that fails to pay hommage to the genre.

The movie opens with two dudes engaging in a heated debate about the horror canon. It would be fun if it weren't a tired cliche. Moreover, the rest of Morbid isn't nearly as post-modern as this scene would have you believe. An attempt to invert the male gaze is undermined by the film's lack of shower scene nudity, and the interminable pacing of the kills--not to mention the action and blocking--suggests that Conry is better off behind a keyboard than a camera.

That having been said, Morbid's script is thin on plot. And pages. Clocking in at 72 minutes, Morbid is little more than a series of kills strung together and intercut with too-long scenes of people talking about teen melodrama. The story, such as it is, revolves around a post-game house party and a love triangle. The cops want to shut the party down and, well...that's about it. If you're wondering how a masked killer fits in, so am I. Only two victims have been found, and no one at the party either knows or cares about the double homicide, nor do they (or the cops) even realize the killer's still out and about. At no point do the party-goers know they're in danger, meaning there's no tension whatsoever.

The thing about the slashers of yor is that the killer had some connection, no matter how tenuous, to his victims, and that at some point the over-sexed teens realize (too late) their numbers are dwindling. This is what ratchets up the tension, when the suspense, which has been boiling under, boils over and all hell breaks loose. Conry, however, seems to have fixated solely on the gore, forgoing story and plot for body count.

And he's not the only one. The genre is chock full of no/low movies inspired by the slasher classics of yesteryear made by horror lovers who display more passion than talent. As good/bad as the inspirational source material may be, it still had some semblance of story--some reason why the movie is happening. This simple fact, this basic tenet of storytelling, seems to have escaped Conry. 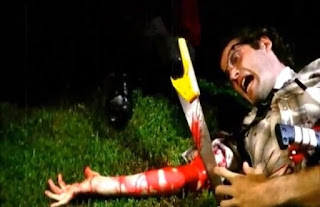 Other things that escaped Conry include camera angles and perspective.

Unless, of course, I'm wrong. The possibility exists that Conry is a genius and I'm too dumb, too self-absorbed, or too elitist to see it. Maybe Morbid's total lack of story is a comment on the state of the genre today. The disparate and disassociative nature of Morbid's narrative is a direct criticism of story's diminished position among an audience that only cares for incident. That the town's Sheriff is more concerned about a kegger than a brutal killer is a wry dig at morality and a keen observation on slasher tropes.

Morbid is a horror comedy that isn't funny. None of the jokes land, with one exception, and it's more outrageous than hilarious. I also got a big kick out of what might be the worst rap ever, only because it was so bad as to be funny. I'm not sure if that was the intent. When I did laugh, I was laughing at Morbid, not with it, and that's a problem for a movie that's supposed to be funny on purpose.

Perhaps most annoying is the promise of an ending (I'm paraphrasing here) "as shocking as Sleepaway Camp." Granted, this part isn't Conry's fault; the DVD box suggests a surprising twist end I'll never see coming. So while I was fidgeting my way through the longest 72 minutes of my life, I was also trying to figure out the twist, trying to guess who's the killer. What I didn't realize is that Rue Morgue, who made the comparison to Sleepaway Camp, meant it literally. Meaning, there is a penis at the end of the movie.

And much like the flaccid phallus that punctuates the film, Morbid lacks substance. Like all other no/low horror, it was a good effort, but this one falls way short of the mark. The film's technical problems not withstanding (matching, re-shoots, editing, not leaving the tripod in the shot when you're going handheld), Morbid's complete lack of narrative arc meant the project was doomed from the start.
Posted by DM at 21:17