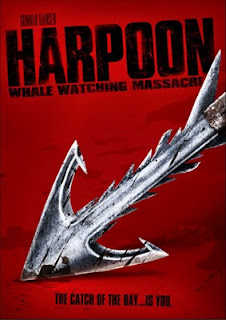 What is going on with this movie?

That's not meant to be negative, by the way.  Harpoon: Whale Watching Massacre is good.

A group of people head out one morning to go whale watching.  An unfortunate accident leaves them stranded in the middle of nowhere, but they don't have long to wait before they're picked up by a local fisherman.  It's perhaps not the most inspiring rescue, but it's a rescue nonetheless.  Things only get worse for the poor whale watchers when they transfer to the fisherman's boat and the titular massacre begins.

The film is pretty straightforward, and does a good job of navigating the contentious issue of whaling.  Whaling was, at one time, the primary industry for a number of countries, including those represented in the film: Iceland, Japan, and the United States.  Over-fishing, the discovery of petroleum, and, most recently, environmentalism, have spelled the end of whaling, although certain cultural and ethnic groups retain a right to hunt whales as part of their heritage.

Harpoon doesn't comment on cultural whaling rights, but it does touch on economic rights--a belief that you have a right to exploit a resource because that resource has, in the past, benefited you.  In the film, conflicting viewpoints with regards to the Icelandic whaling industry are represented by the antagonistic former whalers, and the benign whale-watching sea captain, an old whaler himself.  Where one group simply substituted people for whales, the other kept up with changing attitudes and parlayed their hunting business into a tourist industry.

But there's more going on in this movie than just whaling.  Along with the dichotomous Icelanders, a number of other nationalities are represented in various ways.  Most interesting are the American and Japanese characters.  Not only do they share an economic whaling history, but between them, the characters embody current stereotypes and archetypes.

Marie-Anne is selfish and lonely.  More than just a bitch, she's self-centered to the point of being a pathological narcissist.  Leon, on the other hand, is selfless and heroic.  He is everything Marie-Anne is not--is her saviour, in fact--but he's also black and gay.  The subversion is subtle, as Leon demonstrates none of filmic "black" or "gay" qualities audiences would normally expect. Subverting standards like this, Harpoon demonstrates a keen insight to horror film.

Mr and Mrs Nobuyoshi are what you would expect of a caricature Japanese couple.  He is arrogant and demeaning, she is meek.  Their interpreter, Endo, on the other hand, though small, is perhaps the strongest character in the movie.  She fights, murders, and bribes her way to survival with a single-minded determination matched only by the evil whalers. Endo herself is not evil, but her actions might undercut an etic post-WWII Japanese sensitivity for negotiation tempered by a global understanding of the current "scientific" Japanese whaling expeditions.

Harpoon is a movie about people getting killed by whalers, but it is also more than that.  It's about defying expectations and subverting the horror genre.  And then there's the whole whaling thing: individual stasis in a changing economic landscape.  Originally released as Reykjavik Whale Watching Massacre, the name was changed for North American audiences.  That happens a lot, and I'm not sure there's much to be said about it, but in a movie chock full of meaning, I'm willing to bet on a layered reading of Harpoon's title.

Also, it's a movie with the word "massacre" in the title with a cameo by Gunnar Hansen.  Come on! 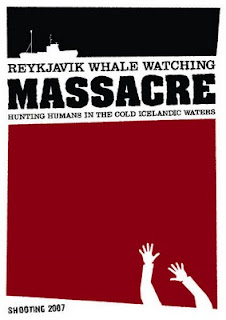