Militant Canadian that I am, I couldn't help but scoff at the Unstoppable trailer the first time I saw it.  Amused and bemused by its claim of truthfulness, I turned to Don and said, "That's totally Canadian."  And without waiting for a prompt from His Schlockiness, I delivered a history lesson unto him:

On 8 February 1986, two trains collided outside Hinton, Alberta.  A freight train hit a passenger train, killing 23 people.  An inquiry found the freight train engineers to be at fault, and condemned Canadian National Railway for poor employee practices (at least one of the engineers fell asleep as a result of bad shift scheduling). 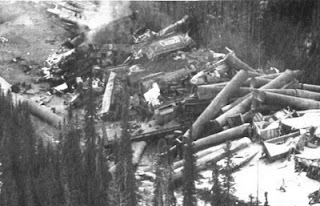 Truth be told, I don't know for sure if Unstoppable was inspired by the Hinton crash, but since they both involve a runaway freight train, it's easy to see how I came to my conclusion.  And since I'm being honest, I'll admit I wasn't super jazzed about seeing this movie.  Not because I care about its dubious truthfulness, but I just simply wasn't taken by the premise.

It's a Tony Scott film.  I should have known better.  Unstoppable is an exciting ride.  Sweeping camerawork matches the momentum of a fast-paces script.  I have very little time for bullshit in an action movie, and this film doesn't waste any of my time.  Granted, there are some clumsy attempts at drama and inter-personal conflict, but the film, for the most part is rather lean.  That's not to suggest the story is thin, it just isn't padded with useless plot.

The story is pretty straightforward: Due to human error, a freight train carrying thousands of gallons of volatile chemicals is barreling through northern Pennsylvania, unmanned.  Rookie railroader Chris Pine and veteran engineer Denzel Washington, after narrowly escaping being rammed by engine 777, decide they're going to try to slow down the train before it has a chance to crash and explode and kill a lot of people.  They're hindered by corporate, aided by a local yardmaster, and being watched by the media.

The media angle is particularly interesting.  Downplayed in the actual story, the media's coverage of the event takes up a significant amount of screen time.  I hesitate to suggest there's some kind of commentary at work here, but the fact of the matter is the news clips, which are cut into the action, add to the film's tension and excitement.  TV news loves an exciting, potentially tragic, unfolding story, and a runaway freight train loaded with explosives and headed toward derailment in a populated area is just the kind of thing that would put the world on hold.  The filmmakers do an excellent job recreating the kind of bloodthirsty coverage you see in the news of similar events, constantly reminding the audience what's at stake and the risks involved.  When Chris and Denzel devise their own plan to stop the train, the news media picks up on them and forces the railway's hand in formally endorsing their plan of action.  Almost clever and subversive in its use and portrayal of TV news, Unstoppable works the media angle more to the benefit of the audience than the story.

And you know what, I don't think I would have liked it as much as I did were it done differently.  Despite its rather hilarious opening (the look and feel leads you to conclude engine 777 is possessed of an evil will), the film grabs you almost immediately and maintains its momentum right up to the end.  It's exciting, it's simple, and it made me forget that I'm not a huge fan of Denzel. 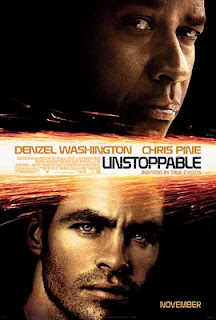 Is it just me, or does it look like Chris Pine might be entirely made of CGI.
Posted by DM at 21:42

I have yet to watch this movie but it is based on a true story. When I saw that they were saying that, I took the time to look it up. Back in 2001 in Ohio:

A runaway freight train that barreled through 66 miles of northwestern Ohio with no one aboard was halted safely Tuesday by a railroad worker who jumped onto the moving train and pulled its brake.

The 47-car CSX train was slowed down by another engine in a coupling maneuver.

Two of the train's tank cars contained thousands of gallons of the hazardous material molten phenol acid, a toxic ingredient of paints and dyes harmful when it is inhaled, ingested or comes into contact with the skin.

So for once the claim is true.

I stand corrected! Thanks Heather :)