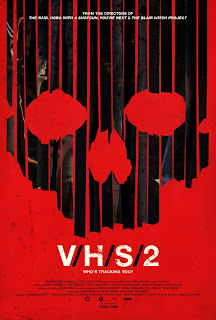 Way better than the first.

V/H/S set a pretty low bar, so maybe we shouldn't praise the sequel too much. It could be we're lauding it more than it deserves because the first movie was so bad. I mean V/H/S did have some good moments: the succubus was cool even if the story was tasteless and ill-conceived; the video call was an interesting and effective take on ghost hunting; and the nanny cam costume was truly inspired. But the film's framing story was so terrible that it lowered the tone of the anthology as a whole. Somehow, someway V/H/S/2 has managed to overcome its flawed premise to deliver a serviceable found footage anthology.

There's nothing particularly special about the framing story but it does embrace the supernatural elements at the heart of the story. The film makes no effort to explain exactly why or how digital video has made its way onto VHS, but it does acknowledge there's something special about the tapes. Unfortunately, the story falls apart toward the end; you gotta work hard to write something that dumb.

Tape 49 is vastly superior to its predecessor, but still manages to maintain the original sleaziness that so distinguished the first installment. Not half a minute into the proceedings we're met with boobs, and presented in such a manner as to suggest we're enjoying the POV of a peeping tom.

Thanks for keeping it classy.

Perhaps the weakest of the four films that make up the anthology, Phase I employs a literal interpretation of point-of-view. A guy has a prosthetic eye that also happens to be a camera. The camera not only sends information to his brain, but the images are also received and reviewed by his benefactors. He's not home an hour before he starts seeing...things.

In truth, there are some startling moments in Phase I, but the overall effect is lessened by the appearance of Clarissa, a woman who's experiencing similar side-effects from her own surgery. How does Clarissa fight back against the uninvited visions? By having sex, of course.

Thanks for keeping it classy.

Phase I does have a rather horrific ending, but there's no real closure to the story. And given Clarissa's perceived age, there's at least six years of data on these side-effects. She's got to have more to offer than just sex.

A Ride in the Park

This would have been a great little zombie romp if it weren't for the goddamn shakycam. It gave me such a headache, I had a hard time enjoying the segment. Or the rest of the film, for that matter.

I'm getting nauseous just thinking about it.

Easily the best of the lot, and if the film cut about two minutes before it actually ends it'd be near-perfect.

A film crew manages to talk its way inside the compound of a cult leader rumored to engage in pedophilia. In addition to the two cameras they bring with them, each crew member is wearing a button cam which surreptitiously records everything they see. They think they've gotten the better of the cultists, but it soon becomes clear the "father" has more than just a interview in mind.

Safe Haven is a balls-out insanity ride. There's some attempt at human drama but it's completely overshadowed by the crazy shit that's going down. And just when you think you've got a handle on what's happening, something even crazier happens.

Just be sure to skip to the next chapter when the feed cuts out. Otherwise you'll be treated to a gratuitous up-the-nose shot reminiscent of BWP only way grosser and less important.

This one's a bit of a mess. It's good, but it hits the same note again and again to the point of near-boredom. And then it ends in the most upsetting way, it's hard to know how to feel about it.

The film is exactly what it sounds like: kids have a very close encounter one summer night. The first half of the segment is devoted to a couple of boys tormenting their older sister. The second half is the alien abduction. Indeed, the abduction sequence is disorienting but we soon become inured to the bright lights and loud noises.

Again, I recommend shutting this one off early in order to spare yourself the pain and confusion brought about by the film's sudden turn. Worse still, the turn it takes is in service of nothing because the movie is over. SPAA serves as an example of how a good film can be knocked over by a bad end.

I feel I should mention something that's specific to my experience with V/H/S/2. I saw this film as part of a double-feature put on by Toronto After Dark Film Festival as part of their Summer Spotlight. Before the screening, TAD staged their own V/H/S-inspired moment in which a guy collapsed while introducing the film and his colleagues pulls a tape from his bag and asked that it by played. What followed was a short film in which the collapsed man chronicled his descent into madness after having watched V/H/S/2. It was a great intro, made all the better by the fact that it was being filmed as a kind of meta call-out to the found footage conceit.
Posted by DM at 23:17