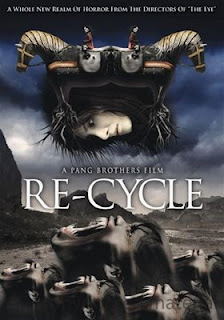 Truth be told, I haven't actually finished watching this movie.  And I'm not sure if I'm going to.  I like a slow burn as much as the next girl, but come on.

Ting-Yin is a celebrated novelist working on her new book, a supernatural thriller.  It's her first ghost story.  She's warned that writing about spirits can make them manifest but Ting-Yin isn't that superstitious.  But, sure enough, she begins to experience strange happenings in her apartment and gets sucked into a dark fantasy world.

It's not that Re-Cycle is bad, it's just so slowly paced that it couldn't hold my attention.  The worst part of the whole experience is that the film is right up my alley: it's a creepy ghost story with a dark world of make-believe.  In fact, the other world is a lot like The Neverending Story's Fantasia crossed with the junk heap from Labyrinth.  There's even a Nothing-type thing that's slowly eating away at everything--it's the titular Recycle, a force that destroys the other world so its ideas can be remade in our world.

I really didn't get far enough into the film to comment on its themes and whatnot, but I suspect the film will eventually touch upon love, loss, and regret.  Ting-Yin was deeply in love once upon a time and then suffered terrible heartbreak when dumped.  Now her ex is back in Hong Kong and looking to reconcile.  Since the other world is largely composed of old ideas and things thrown away, there's a good chance Ting-Yin will eventually encounter some manifestation of her old lover.

I've seen a handful of Pang Brothers movies, which have been hit and miss.  The Eye I enjoyed and The Messengers was good up to a point (that point being Kristen Stewart).  But I thought Bangkok Dangerous (2009) was pretty dull.  Not a great track record for Oxide Pang Chun and Danny Pang, but maybe it's my fault for not choosing to watch any of The Eye sequels or Forest of Death.

Regardless, I'm a little underwhelmed with Re-Cycle even though I should be, by all accounts, in love with this movie.  It's even got a couple of good creep-outs, and the other world is wonderfully strange and dangerous.  The pacing, however, is just too slow and whatever forward momentum is gained by the introduction of the recycling force is halted by the film's and Ting-Yin's meanderings.
Posted by DM at 11:31

I actually heard about this one just recently and will probably give it a watch soon. By your review, it seems to be exactly what I expect.

I enjoyed it, but saw it so long ago I can't remember much about it. I think I just like the creativity of it - there were some really creepy visuals and characters in there. Maybe not one for everyone.

Atroxion, let me know how it goes.

Chris, I liked what little of it I saw and I got creeped out a couple of times which is always a good thing. But I guess I can't just get around the pacing. I'll finish it one of these days because I do want to know what happens.

Did you know that you can create short links with Shortest and receive cash from every visitor to your shortened links.