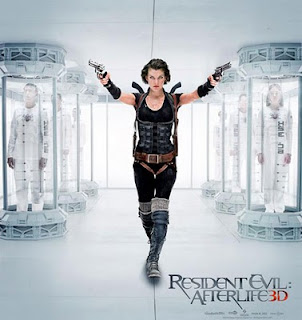 I will fully admit to owning and watching the first Resident Evil movie.  It's not a great film, but I like it.  I like how quiet it is.  That might seem like a strange thing to say about an action movie, but RE is, literally and figuratively, pretty quiet.  It's not in a rush, I guess is what I'm trying to say, but still the film manages to sustain its forward momentum.

Resident Evil: Afterlife, however, is a different matter.  The film suffers a little from a lack of rising action, but the story moves along in a forwardly direction, and managed to hold my attention.  RE3D opens with the promised attack on the Umbrella Corporation's Tokyo facility, in which an army of Alices rain death upon the unfortunate Japanese employees.  After that, Alice, the first one, takes to the sky in search of the fabled Arcadia, an infection-free zone rumoured to be somewhere in Alaska.  All she finds is Ali Larter.  The two head down the coast to LA, where they hole up inside a prison.  There they learn exactly what and where Arcadia is, and make a plan to finally reach the fabled land.  Even more secrets are revealed once they get there, and the film concludes as all RE films do, with a hint of what's to come.

Really, what makes this movie great is the action.  I've complained all over the place about how bad action movies are these days.  I blame the film Armageddon for that; I distinctly remember getting a headache as a result of all the fast edits in that movie.  Since then, directors have seized upon the notion that more is better.  The more edits you have in an action sequence, the more exciting it is because, in their view, the frenetic pace of the editing matches the fast-paced violence going on, fully immersing the audience in the moment of the fight.  Although ADD editing and shakycam may contribute to a more realistic mise-en-scene, they ultimately inhibit the flow of the action and prevent the audience from following and appreciating the onscreen visuals.  Say what you want about Paul W.S. Anderson, he's succeeded in making a movie that offers up clean, crisp action sequences that don't lack for excitement.

RE3D could be criticized for its (over)use of slow motion--there is an awful lot of it--but the fight scenes greatly benefit from the liberal application of slow-mo.  You can see what's happening and are more invested in the proceedings because of it.  Moreover, the slow motion combined with the 3D helps to promote the latter's ability to, when used properly, create a rich visual experience.  Highly stylized in this way, RE3D blows everyone else out of the water.

It's unfortunate the rest of the movie isn't as satisfying.  The film did manage to surprise me from time to time, which in itself was surprising because RE3D is, essentially, a run-of-the-mill zombie flick.  And it does have a sense of humour, which was unexpected and refreshing.  But for all the fun I had at the movies, I was still bothered by a couple of things.  Firstly, out of the multitude of people who worked on this film, not a single one seems to understand how latitude and longitude work, nor does anyone appreciate the difference between degrees and decimal degrees.  This rather minor criticism is further dwarfed by my second complaint: the CGI is terrible, despite the fact that everything else in the movie looks so good.  For whatever reason, the filmmakers couldn't get their shit together when it came to mouth-tentacles.  I'm serious, it's fucking awful.
Posted by DM at 21:10