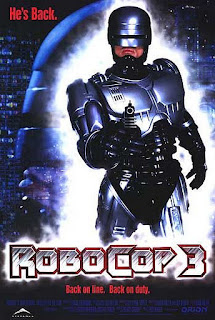 A timeless classic since 1987, Robocop is one of the finest action movies made in the last century.  The film spawned two sequels, but it is the third movie in the franchise that actually serves as a direct sequel to the first.

In RoboCop, mega-corporation Omni Consumer Products is set to revitalize Detroit by tearing down the inner city and building its own Delta City in its place.  But building Delta City means first clearing out the criminal element, and then clearing out the inner city residents.  To this end, OCP develops RoboCop, a cyborg cop built from one of Detroit's finest.  The film follows Robo, nee Murphy, as he uncovers corporate corruption and avenges his own death.

RoboCop 3 picks up not long after the events of the first film.  The movie opens with OCP's urban relocation programme, as wrecking crews roll through downtown Detroit.  No longer the guiding hand or force majeur in the narrative, OCP (and its parent company, Kanemitsu) is recast as the villain.  OCP's newest addition to the police force, the Rehabs, are little more than a paramilitary group, soldiers brought in to wage a war on Detroit's urban population.  Our hero, Murphy, and his partner Lewis find themselves on the wrong side of the law when they vow to protect the innocent.

The two films, when placed side by side, have a kind of symmetry.  At the end of the first, the head of OCP asks RoboCop his name, to which he replies, "Murphy."  At the end of RoboCop 3, the new CEO addresses RoboCop as Murphy and is told, instead, to call him RoboCop.  Robo's tracking beacon, introduced in the original, is used against OCP, and ED-209 who suffered a humiliating defeat in the first movie is overridden by a child in this one.  Locations, too, are reused to great effect.  The factory in which Murphy dies and later finds closure, is occupied by the civilian resistance.  And even the SUX, which was advertised in the first film is name-checked in the third. 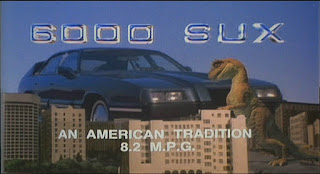 But the real connection between the two films is in the plot.  Prime Directive 4, which challenged Murphy's ability to get justice for himself in RoboCop, is a real obstacle in RoboCop 3.  Murphy was able to manipulate the situation to work around Directive 4 in the first film, but once he goes underground he has to overcome his personal obstacles instead of detouring past them.  Although not quite a hero's journey, RoboCop 3 develops Murphy to the point where his humanity is able to supersede his technology and programming.

Other cast members also enjoy a bit of character development.  The poor, overworked Sgt. Reed finally makes a stand when he refuses to follow OCP's orders.  Arguing that forcefully removing people from their homes is not his job as a cop, Reed walks out of the police station.  In the original film he argued against striking, stating that cops don't go on strike, and earlier in RoboCop 3 he gives Murphy a direct order which is ignored.  Now faced with his own moral dilemma--to either do his "job" or do what he feels is right--Reed leads Metro West PD on a walk out.

It's somewhere around this point in the film that RoboCop 3 takes a nose dive.  Never very good to begin with, the movie suffers a saccharine plot involving a precocious child, yet another robot, and a jet pack.  With all the cliched story additions and plot developments you would expect of a franchised movie crammed into the script, it's too much of a sequel to be any good.

And that's the real tragedy of RoboCop 3; as the third movie in the series it didn't receive the attention it's script deserved.  What could have been a halfway decent follow-up to an amazing original movie is instead half a sequel and half an excuse to see Robo fly.  And then only for a minute. 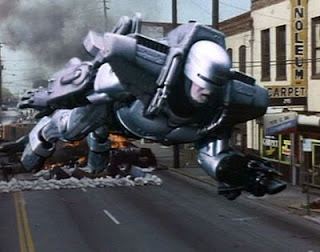 on the plus side, director Fred Dekker did direct Monster Squad as well as Night of the Creeps. I'll forgive him for this turd.

Agreed. I do so love Night of the Creeps.