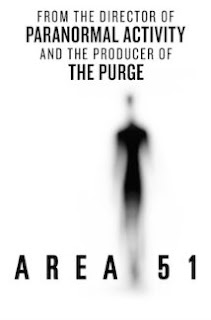 For a movie that took eight years to get made and released, Area 51 looks like it was slapped together in a matter of days.

Describing Area 51 as lazy just seems lazy on my part. But it does appear as though Peli kind of gave up on this one. No real effort was made to innovate or further develop either found footage filmmaking or the alien subgenre. Instead, characters and audience members alike stumble through the plot, while the movie awkwardly cuts between POVs because Peli doesn't know to manage two dynamic cameras.

Quite frankly, I don't know what's worse, the story or the execution. Reid is obsessed with aliens and plans to infiltrate Area 51. With him are Darrin, Ben, and Jelena. Ben really doesn't want to have anything to do with breaking into a military base, so he just argues with Reid all the time and drops everyone off by the side of the road. Reid, Darrin, and Jelena enter Area 51 with little trouble and what happens next has to be the most boring and visually incoherent exploration of a top-secret facility ever recorded. I'm not even going to bother trying to explain it. Suffice it to say, no aliens are ever caught on tape and what little alien activity does take place is more akin to a poltergeist going apeshit than what you would want or expect from a rampaging monster from beyond the moon.

As if to add insult to injury, the scenes are stitched together with no regard for geographic orientation or continuity. There is no way for the audience to orient themselves in the film space--there are no landmarks to help tie all the rooms, corridors, and stairwells together. Other reviewers describe Area 51 as a "sophomoric slump" but I think the film's incoherent visuals are evidence of a bigger problem: that Peli doesn't know what he's doing. 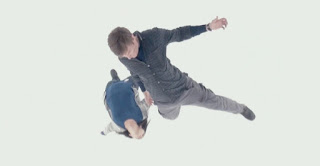 Further evidence includes the film's structure and style. At least half the running time is given over to Reid and co.'s preparation for their raid on Area 51. This includes stalking an employee, visiting a storage facility, and sneaking a bodycam into a strip club. There is absolutely no tension or suspense, either during the prep nor when they succeed at getting onto the base.

Moreover, the film begins as a kind of documentary, in which people talk about Reid and his friends in the past tense. It switches to found footage shortly thereafter, then back again to a more standard documentary style with a montage of conspiracy theorists spewing their crazy ideas. Classic found footage takes over for the remainder of the movie, but in name only. The film is cut together like a traditional third-person narrative. Admittedly, found footage has evolved past the need for a framing story to explain why and how the film exists, but Area 51 desperately needs a reason for being. The "invisible hand" is all over this thing, and even something as simple as "I found these two cameras and followed-up with the families" would help immeasurably.

But Peli doesn't seem to understand any of this, and appears to be in well over his head. Paranormal Activity was a cozy ghost story with good pacing and a great sound design. Area 51 is too big, with too many locations, and relies too heavily on the promise of wonders we can both hear and see (a promise which is never fulfilled). Worse still, he had a much better, easier, and more compelling story languishing off-camera. Peli had a real opportunity here to learn and grow as a filmmaker by developing Area 51 as a mockumentary about Reid and his slow descent into alien abduction/conspiracy theory madness. But all that good stuff happens between cuts, glossed over by a title that reads "Three Months Later." 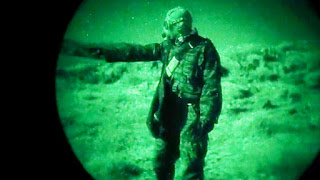 Pictured: what it looks like to be in over your heard.

Area 51 isn't just a bad second movie, it's a step backward. Peli might be a competent producer, but this film proves, more than anything, that he can't script a story: Reid and Ben argue about stuff that should have been settled a long time ago; likewise, the night of the raid is not the night you field test your gear for the first time to make sure it works. The movie is too aware of its audience and (ironically) in too much of a hurry to allow its characters to behave normally and move the story forward on their own. Were this film made before PA, it could have served as an awkward but ambitious first step down an exciting career path for Peli. Instead, it's a harsh reminder that not everyone can or will live up to expectations.
Posted by DM at 13:51

As I'd prefer to avoid this, can you tell me if Peli realizes that Area 51 is a military base? Because even if the characters think they can avoid the security (which no one has yet), they're going to run straight into hundreds of armed troops.

I have just installed iStripper, so I can watch the sexiest virtual strippers on my desktop.