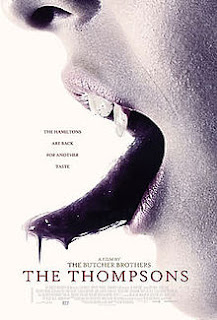 The Thompsons is the sequel to The Hamiltons, a movie I've never seen. According to Count Vardulon, it sucks.

Normally, this is the part of the review where I synopsise the film, but what's the point? The Thompsons has so little content, a synopsis would be nothing short of an exercise in futility. Suffice it to say, the movie's about the Thompson family of vampires who run afoul of another vampire family. Everyone acts like a jackass and then it ends.

The Thompsons had the potential to be a passable movie, maybe even an okay one. But instead it barely merits viewing. The problem lies in the film's mishandling (misunderstanding?) of conflict. Thankfully, the script shies away from manufacturing the kind of interpersonal conflict often seen in horror: two or more friends who argue with such intensity and frequency that it invalidates their friendship. Why are these people paling around in the first place; their constant ad hominem arguments cause the audience to emotionally disengage from the film, which is just about the last thing you want to happen. The Thompsons doesn't go in for any of that nonsense. The Thompson family is loving.

They're also vicious monsters who feed on the blood of the living. But they get along, so that's nice. 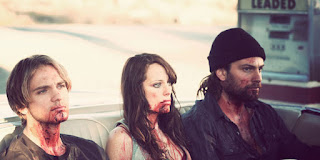 No, the "conflict" in the film stems from outside the Thompson family. When Francis Thomspon arrives in Ludlow, England, he meets the Stuarts who, it turns out, are also vampires. The Stuarts immediately hatch a plot to capture the Thompsons. The film pits the Thompsons against the Stuarts which in any other movie would make for some good drama, but not here. Unbelievably, the film seems to misunderstand its own plot. According to the script, the Stuarts don't want the Thompsons moving the Ludlow and usurping their power within the community. According to the actual story being told, the Stuarts are too inbred to produce viable offspring and they need Darlene Hamilton for breeding stock. The movie downplays the Stuart's long-term survival needs in favour of a non-existent feud.

At no point in the film do the Thompsons ever make overtures to power. Never does any family member hint at reclaiming their seat in Shropshire. In fact, the Thompsons didn't even know about their familial connection to Ludlow until the Stuarts told them. That the film should choose to subvert the more realistic and pressing issue of Stuart offspring for the manufactured and underwritten Stuart paranoia is at best bad writing, At worst, it shows a complete lack of faith in the film's main point of conflict.

In a good film, conflict flows naturally from characters and situations. In a bad film, conflict is forced upon the audience and has a distinctly unnatural quality. In The Thompsons, conflict seems to be pulled from the ether. The Stuart-Thompson family feud comes out of nowhere, subsuming the much more immediate conflict of two families fighting each to the death. Who cares about future generations when extant family members are in mortal peril? The Thompsons doesn't so much undermine its situational conflict as it does overshadow it with a bigger and ultimately less important historical one.

If the writers were more confident in their story, The Thompsons would have been a much better film. But, as it is, the movie suffers from ill-conceived notions of character motivations. I suppose it wouldn't be as much of a problem if the rest of the film wasn't so boring.
Posted by DM at 23:27

'The Hamiltons' doesn't totally suck - with proper editing it could be transformed into a good 15 minute short.

please can you visit here..