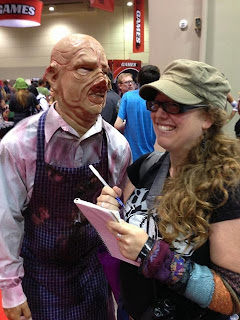 And so ends another fabulous/exhausting Fan Expo weekend. Unlike last year, TheAvod did not have a table at the convention so I had a lot more time to wander around and take in the sights, sounds, and smells of Canada's largest geekout. 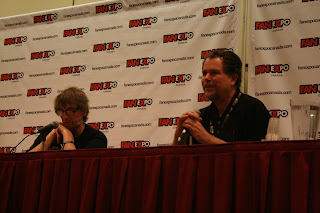 I saw very little of the con on Thursday (opening day) because I got invited to something cool that I can't talk about right now. After a late-ish night hanging out with Count Vardulon and friends, I managed to arrive at Fan Expo early enough to catch Don Coscarelli's Friday morning panel. He assured us that he's still pushing to get Bubba Nosferatu made, even though the teaser ad at the end of Bubba Ho-tep was meant as a joke. Did you know Brad Pitt auditioned for Survival Quest, and that Coscarelli was offered the director's chair for Conan the Destroyer? When talking about Phantasm, Coscarelli told us an award-winning writer has written a kickass script for Phantasm 4 but it will likely never see the light of day.

I was in the same room as The Wordburglar 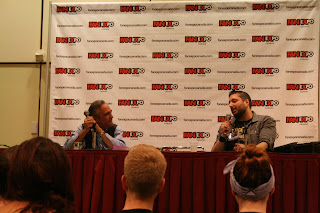 I didn't find out until much later on Saturday, that The Wordburglar was also at the Joe Dante panel. Mr. Dante regaled us with stories about what it was like to work for Roger Corman, and how he once suggested "Free Beer" as an equally misleading but much more enticing title for Amazon Women on the Moon. Perhaps one of the more incredible stories involved a certain werewolf movie and a certain makeup artist: As it happened, Rick Baker was on board to do the creature effect for The Howling, but once John Landis got wind of Dante's project, he finally got An American Werewolf in London up and running and lured Baker away (Baker had promised Landis he'd work on his film, if it ever got made). Baker suggested Dante work with Rob Bottin and they pieced together the look of The Howling werewolves using different actors in different parts of the werewolf costume.

I was in the same room as The Wordburglar 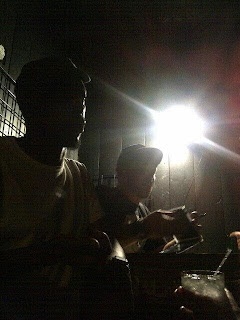 Shunning the "official" Fan Expo party, Rue D'Awakening (formerly Anonymous) and I went to Nerd Noise Night at The Horseshoe Tavern. In truth we were there explicitly to see More or Less and The Wordburglar, both of whom just KILLED it. It was an amazing sold out show, and we got to hear new songs from Welcome to Cobra Island (out now) and the Dr. Who Mix Tape (out soon).

I stood shoulder-to-shoulder with Three Finger 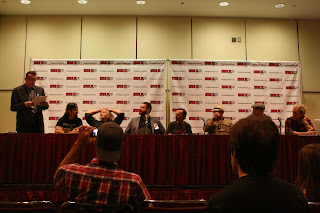 I really like Julian Ritchings so it was pretty amazing to find myself standing next to him. "I'm quite a fan," I told him.
"Thank you," he said.
And then I turned away to pitch an interview with a couple of guys from Collingwood, Ontario.

There was nothing in the Fan Expo guidebook about the panel "They Came from Collingwood." It could have meant Collingwood the town or Collingwood the psychiatric hospital in Grave Encounters. I prayed it was the former and my prayers were answered by Foresight Features who treated us to a sneak peak of three new releases: Septic Man, Hellmouth, and Ejecta. Each film is very different from the next, and all were made back-to-back. Tony Burgess told us an hilarious/gross story about how Septic Man came to be, and we learned about render farms. Render. Farms.

Other highlights from the weekend include discovering The Birthday Massacre and chatting with a the co-founder of a Mason biker club, interviewing Max Brooks, and being nearly brought to tears by George Takei. Creep my photos at TheAvod's FB. 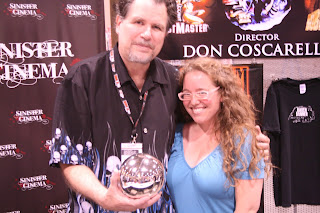 What!? chatting with me wasn't a highlight of the convention!?
;P