Actually, enough has probably been said about Piranha 3D.  I didn't expect much from the movie, and I didn't get much, so no big disappointment.  Except for the 3D.  The film was not shot in 3D so the conversion did nothing for the visuals.  In fact, the effects suffered for it.

I'm not a huge supporter of 3D.  I view it as a gimmick--a way to part you with more of your money.  Promising a more engaging or in-depth movie-going experience, 3D is nothing more than pomp and lends nothing of substance.  Not that I ask a lot of the movies I watch, but crap is still crap, even if it's in three dimensions. 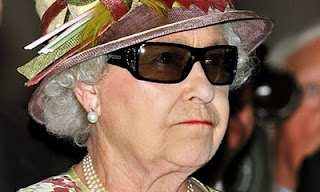 Even if it's viewed by the Queen through crystal encrusted glasses.
That's not to say Piranha 3D is crap, I thought it was highly entertaining if a bit stupid.  And not stupid because it's about prehistoric carnivorous fish--I have no problem with that.  Stupid because everything else was so flat.

The theatre was by no means busy, but there was a steady trickle of people buying tickets.  They weren't buying tickets for Piranha 3D, however, because the cinema turned out to be relatively empty.  Regardless of the vast number of seats available, a group of girls chose to sit right next to Don and I.

As the lights dimmed, we were encouraged to turn off our phones.  I'd forgotten all about my cell, so I dug into my bag and shut it off.  I saw the girl closest to me tapping the buttons her phone, as well.  Turns out she wasn't turning it off, she was texting.  And she continued to text for the 90 minutes.

At least she wasn't a talker.  I guess.

Long have I lamented the overuse of jump-scares and musical stings.  I'm fine with a few well-placed scares, but too many of them and after a while you see 'em coming and familiarity breeds contempt.  I never understood why filmmakers insist on amping up the cheap scares--surely audiences are smarter and more sophisticated than Hollywood gives them credit for.  Surely the irritating feedback loop of remake-jump-scare-remake again can be broken with a few well made, original fright fests.  You know what I'm talking about, the kind of movie you take home, the kind of movie that haunts you long after the lights have come up.

The girl beside me begs to differ.  She won't go see a movie like that because they don't make her scream.  And boy does she like to scream.  Every goddamn time a fish jumped out of the water and the music swelled to a fevered pitch, she screamed.  Body appears out of nowhere: scream.  Body disappears into the water: scream.  I punch her in the arm: scream. 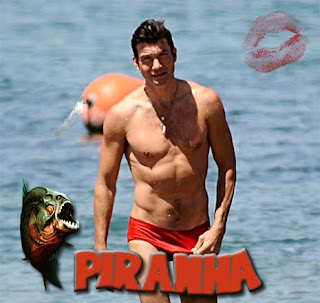 Scream!
The best, or perhaps worst, part of this whole scene was that because of her texting, her reaction time was delayed.  With one eye on her phone, she was only half seeing what was happening on screen and when something big or loud enough caught her attention: scream.  I insist on believing she screamed louder than anyone as a way to make up for her inattention.

So much for sophistication.

And then came the long-awaited massacre part of the film, where the ravenous and insatiable piranha descend (ascend?) upon the nearly-nude spring break revelers.  There's a great scene in which an asshole character jumps in a boat and begins driving over the victims in the water.  Just mowing them down as he attempts to speed away from the carnage.  I laughed my ass off--it was so horrible, so violent, and so believable.

The girl beside me was laughing too.  But for different reasons.  Whereas I was laughing as a way to deal with the awfulness of it all, she was laughing with delight.  She was cheering him on.  I can only conclude that she's either a psychopath or has no idea the boater is supposed to be a bad guy, which further suggests an inability on her part to relate to characters on screen.  You'll note I don't blame the movie--Piranha 3D at least managed to paint its characters with broad strokes.

I hadn't meant for Piranha 3D to be an experiment in audience theory, but the girl beside me managed to disprove my hypothesis regarding horror movie supply and demand.  She and her friends, and by extension a good chunk of her cohort--the people who spend the most money on horror movies--want to be scared, but not too scared.  They want to jump and scream and laugh and then go home and forget all about it.  I want those things, too, but I also want white-knuckled edge-of-your-seat suspense and maybe a conversation while the credits roll.

I'm pretty sure Don wants that as well.  But the girl had two friends with her, and majority rules.  They win. 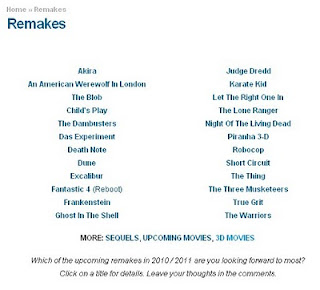 Theater manners are dead. The only way they'll return is if theater owners enforce a string no phones/texting devices rule. They lack the manpower and funds to do it so the less socially-evolved will continue to treat every movie theater like their own t.v. room.

I think it's partly a generational thing - there now is a whole generation of filmgoers who have grown up having films on home video and in theaters so they fail to make a distinction between the two experiences - or the different behaviors one should use in each situation.

p.s.: you were much kinder to PIRANHA 3D than I'll be - expect a postmortem soon over at Schlockmania.

p.p.s.: check out this interview with Alexandre Aja - he bullshits like there's no tomorrow: http://chud.com/articles/articles/24889/1/THE-CHUD-INTERVIEW-ALEXANDRE-AJA-PIRANHA-3D/Page1.html

I have just given you the Zombie Rabbit Award!
http://trickortreatpete.blogspot.com/2010/08/zombie-rabbit-award.html
Dreaded Dreams
Petunia Scareum