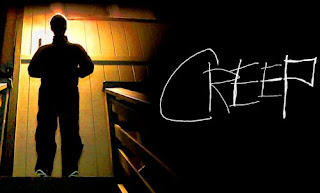 Why is everyone over the moon about this movie?

Here's what the New York Times has to say:


The tricks...are in the unnerving visuals of hand-held hardware, and in the editing. [T]he film is remarkable, considering its minimal means and surprising lack of bloodshed, given the genre.


Not a fan of the Times? Check out what The Village Voice thinks:


It will be a great year for horror movies if another found-footage movie accomplishes as much in once scene as Duplass and Brice do with Josef's disturbing monologue.

In truth, Simon Abrams, the reviewer for Village Voice didn't love Creep, but he makes a big deal about Mark Duplass' performance and did enjoy the movie overall, finding it both upsetting and exciting.

And here's Film School Rejects with their perplexingly positive review:


[I]t's a smart and charismatic film that walks a fine line between thriller and comedy by constantly shifting and subverting expectations. Our experience with the genre tells us the film is about to zig but Duplass and Brice zag instead. [...] There's...an incredibly fun touch involving the pause button. Seriously, it's an ingenious moment. [...] [T]hese two filmmakers have succeeded so brilliantly on their first stab at a genre film.

I don't get it. Is it because everyone loves Mark Duplass and Patrick Brice so much they're given a pass? Have these reviewers never seen a no/low indie FF film before? Seriously, someone please explain to me why Creep got such good reviews because the the film I watched was derivative, predictable, and full of holes.

I mean, I get that I'm coming at it from a different angle. I have a wealth of experience with horror (some might say an embarrassment of experience), never mind my own personal tastes and biases. But still, a plot hole's a plot hole.

Creep (not to be confused with Creep) is about the one-sided relationship that "forms" between Aaron and Joseph. Joseph has hired Aaron to spend about eight hours filming his day. He has his reasons--they're not important. Of course, precisely because this is a horror movie, things take a weird turn when Joseph's behaviour grows increasingly odd. And because this is a horror movie, we, the audience, are waiting for that crucial moment of vindication, when all our doubts are proven true.

Which, of course, they are.

The problem is that Aaron never seems to have any doubts. Or if he does he neither voices nor acts on them. Instead he just goes along with things, subordinating his personality (of which he seems to have very little to begin with) to Joseph's--a man he's only just met.

Sure, you can argue Aaron has an ethical obligation to see the day through since he was paid by Joseph. But Aaron was paid up-front so there's nothing preventing him from leaving, except for when there is--a turn of events which is as predictable as it is awkward.

Worse still, Aaron misses multiple opportunities to save himself. From taking a phone call to not making any subsequent phone calls, Aaron repeatedly puts himself at risk. I can't for one minute write off this lazy writing as "budgetary constraints" because there are so many ways the film could have closed these gaps without incurring additional costs. Moreover, the movie stopped being a just-the-two-of-them-cat-and-mouse photoplay when Aaron regained "control" of the narrative. Aaron makes one attempt--just one--to help himself and it doesn't pan out, but that's no reason to give up and let come what may.

Were Creep a dominance play or character study (which I think it wants to be, given the filmmakers' backgrounds) then Joseph's total domination of Aaron would be an interesting way to drive the story forward. But Creep is not a character study. It's just about a weirdo being weird. Also, he's a big fat liar with an obviously evil agenda so we can't invest in his character to begin with.

Getting back to those glowing reviews. The New York Times praised Creep's minimalist found footage aesthetic. The review would be patronizing were it not clear the reviewer is largely unfamiliar with no/low indie FF horror. Minimalism is the watchword with with this particular subgenre of genre film, and FF is by its very nature tense and creepy.

The Village Voice held over much of its praise for Duplass' performance, calling out one scene in particular. In it, Joseph tells an outrageous story about how he raped his own wife and she LOVED it. Maybe the reviewer was more taken by the fact the whole scene is audio-only and wasn't actually listening to the monologue. Also, if you take the time to parse that quote, the reviewer seems to think one "good" scene can carry a movie. In truth, I've seen lots of good movies ruined by a single bad scene (usually the ending), but few bad movies have been saved by a single outstanding moment.

And finally, Film School Rejects, whose respect for the filmmakers overshadow any objective viewing of their movie. Moreover, their reviewer writes as if he is an authority on genre film but showcases a naivete that undermines his expertise. Indeed, the bit with the pause button is clever, but it's not quite the masterstroke the reviewer suggests; that particular brand of meta commentary has been around for a while, see New Nightmare, Funny Games, and to a somewhat lesser extent Space Balls for examples.

Have I seen worse movies than Creep? Certainly. But I've also seen better. I don't really care that the film was more workshopped than written, that the dialogue is original, spontaneous, and ad-libbed. What I do care is that the hand of the director is still all over this movie. However artful the pause button moment is, the jump scares are wholly unnatural. I care that the story should be self-terminating but for one overlooked plot point. And I care that I can't invest, neither emotionally nor intellectually, in the characters or their plight because the film just isn't that compelling.
Posted by DM at 07:43

Sounds like at least a dozen other films that weren't very good. I'll pass.

Good call. You're not missing anything.