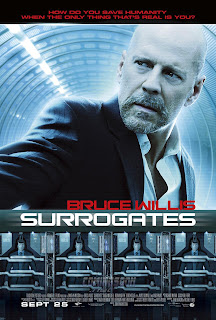 I don't read a lot of science fiction.  Unless you count all those Star Wars books in high school, which clearly I don't.  And, likely because I don't read it, I don't watch a whole lot of sci-fi either.  Thus I am unable to call to mind the myriad sci-fi stories Surrogates invokes.

I do recall one film in which some dude is living as a robot and gets blasted.  Or maybe a robot kills him?  I know someone dies.  And there was this other time all these robots went mental.  And Ghost in the Shell.  That was a good one.

My point is this: Surrogates brings nothing new to the table.  We've been battling our fear of our own mortality since Metropolis at the very least, and we've yet to find the balance between technology and humanity.  Of the few utopic/distopic sci-fi movies I have seen, I've noticed a disturbing trend: the humans/lotecks/dreads live in squalor, refugees from eden barely eking out an existence in a demilitarized zone.  But it's real, dammit; humanity survives, set against the backdrop of its failures.  Don't you get it?  It's subversive.

The only thing Surrogates manages to really subvert, however, is its potential.  James Cromwell invents human-like robots that could be directed with the mind.  A judgement handed down by the supreme court allows people to live as their robots, which gives rise to a generation of shut-ins whose only human interaction is mediated through technology.  The introduction of surrogates results in no more crime, racism, or STDs.  Wars are still fought, of course, but with robots.  The world is a better place.  And then someone gets murdered for the first time in forever.  Like for-real murdered--a robot was shot with a weapon that was able to kill its operator.  Bruce Willis tracks down the murderer and uncovers two different plots.  The first is an assassination attempt on James Cromwell, the second is James Cromwell's own murderous plot to rid the world of human robots. 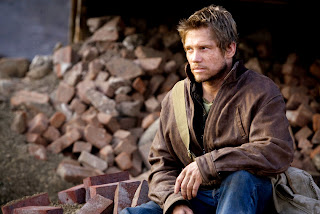 Jake Noseworthy's not a robot, but sadly he dies, too.
Let's forget for a minute that the film grossly misrepresents how legislative policy works, and fails to understand basic socio-economics.  Let's pretend like the industrialized nations wouldn't experience sharp changes in demographics due to declining birth rates and a sickly, inactive, adult population.  All of that aside, Surrogates still has a big problem which, unfortunately, is an integral part of its world: the robots can be remotely overridden.  Someone, somewhere, with enough know-how can either shut down your surrogate or take it joyriding when you're out of the house; you're at the mercy of society's ethics and you don't even know.

Think about it.  You live through your robot and are pretty much invincible.  But you are not your robot, and, pushing aside all the psychological ramifications of a techno-humanity, your robot is just a machine that can be hacked like any other piece of remotely operated or networked technology.  What's to stop someone from hacking the system?  What happens when machine-you is taken over by someone else?  And what does it mean if you have multiple surrogates?

The answers are, nothing, nothing, and nothing much.  In a truly amazing bit of storytelling, Surrogates manages to touch upon themes of morality, identity, and humanity without actually exploring any of them.  It is true that Bruce Willis is trying very hard to reconnect emotionally with his wife, urging her to spend less time as a robot, but the subplot is more love story than allegory.  The movie harps on the pros and cons of surrogacy yet refuses to comment on the freedom of anonymity or the potential for exploitation.

I don't know if all sci-fi is supposed to reflect current society's ideals and shortcomings--maybe I've seen Trekkies one too many times.  But I do know that Surrogates sort of goes halfway to making a point about...something.  The film looks good and is fun to watch, for the most part.  The effects don't always hold up but the robots are satisfyingly creepy, with their waxen faces and dead dead eyes.  Truly, it's an action movie first, with the sci-fi bringing up the rear. 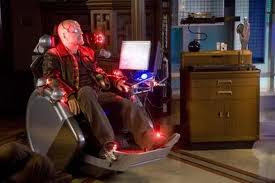