Movies generally aren't complicated.  A story is told, people watch, the end.  Movie advertising, one would assume, is even less complicated.  Ads are produced to get people excited, the end.

On the surface, Monsters isn't a complicated movie.  It's about a man who escorts a woman through dangerous territory.  They get to know each other over the few days it takes them to cross from one side of the danger zone to the other, and fall in love.  This blossoming love story is set against the backdrop of an alien infestation. Six years ago, a spaceship broke up over Mexico during its re-entry, infecting northern Mexico with alien life.  Now northern Mexcio is closed off and it's dangerous (and expensive) to pass through.  Due to some bad timing and an unfortunate series of events, Caulder is forced to escort Samantha through the infected zone.

Doesn't sound too bad, and Caulder and Samantha's love might be challenged and tested by the monstrous aliens all around them and the dangerous situation they're in.  It might be.  You expect that it would be because you know: 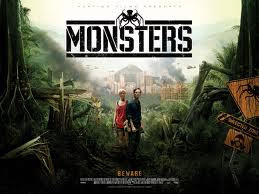 Except that it isn't.

I said Monsters isn't complicated--it's a simple love story.  The film's marketing, however, is bewildering.  And frustrating.  That poster up there would have you believe Caulder and Samantha are constantly at risk of giant spider attack, poison gas attack, and possibly even an outbreak of Triffids.  Indeed, the aliens do make an appearance but their presence and behaviour only underscore the love story.  I don't mean to suggest that horror fans are incapable of appreciating love, but they're unlikely to enjoy or engage in the romantic notion of dangerous adventure when there is, in fact, little danger involved.

Monsters is one of the oldest tropes brought to life and then dressed up as a horror/sci-fi adventure.  The film is successful in telling its story, but at the expense of duping its audience.  This risky move--advertising one type of movie as another--almost always backfires.  The audience, expecting a horror movie with a love story subplot is presented with just the opposite, and duplicitous advertising will fuel the fire of viewers' disappointment.

Word will spread like a bad rash: don't got see it, it's not what you think. 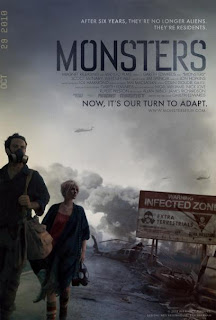 Adapt to what?  In fact, it's like a dream come true for America because now there is a giant wall between it and Mexico.  Interpret that any way you like.
Posted by DM at 17:41

What I think it is one of great movie. Monsters has been widely, and with good reason, compared to Neill Blomkamp's apartheid satire District 9, which also imagined extra-terrestrials in a post-awe spirit.