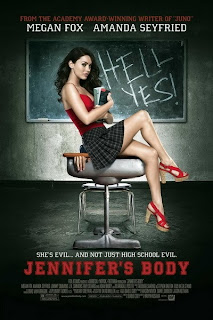 Here is where the problems begin: those desks open the other way.
I remember the hype when this movie premiered.  I mean I should--it wasn't all that long ago.  But more importantly, I remember the bitching.  And I'm kind of embarrassed to admit it, but I jumped in, contributing my worthless two cents, my opinion devalued by the fact that I'd never seen the movie I was talking about.  That hardly mattered to me; I was entitled because I'm a girl.

The big deal, as I remember, had to do with the film's feminist subtext.  Also, it was penned by an Oscar-winning screenwriter.

In short, the film tells the story of a band who, looking to make it big, sacrifice a virgin to Satan.  Only the girl they choose, Jennifer, is "not even a back door virgin".  The band still manages to sign with a label, suggesting that Satan isn't all that fussed about the purity of his sacrifices, and Jennifer is now possessed by a demon.  Once Jennifer figures out what's happened to her, she tells her best friend, Needy.  Needy is appropriately freaked out and decides she'd better put Jennifer down for the greater good.

"Hell is a teenage girl," narrates Needy.  It's the film's opening line and is supposed to set the tone for the next 102 minutes.  Heathers crossed with Mean Girls, one person wrote.  I was a teenaged girl, and I can assure it was hell some of the time.  In fact, being a girl, albeit an adult one, is still hell occasionally.  When the movie came out a lot of reviewers quoted that line because it segues nicely into angsty, feminist deconstructions of a female-written, female-directed, and female-lead horror film.

But Jennifer's Body isn't feminist.  It's not even post-feminist.  It's just a movie about a slut.  It's all right there on the screen--Needy figures out Jennifer's been possessed by a succubus, a hell demon ho-bitch who feeds on men.  There's no subtext, no deeper empowering meaning.  At least not as far as Jennifer is concerned.

Because this movie isn't really about Jennifer.  It's about Needy.  Needy.  Sure Jennifer changes--sort of--but Needy changes more.  Jennifer becomes strong.  Needy grows stronger.  The subtext, so desperately sought after by critics, lies in how Needy manages her change, which is (badly) juxtaposed with Jennifer's possession.  Needy narrates the goddamn movie--it's her story.  Perhaps not the most well-told story given the film's uneven acting, plot holes, and structural instability, but still this film is about Needy's transformation from doormat to dominance.

What everyone should have been quoting is one of Needy's last lines of dialogue. "You know what this is for?" she asks, brandishing a knife. "Cutting boxes."
Posted by DM at 08:58

I'm heartbroken to find, after clicking it in sweet anticipation, that this is only time the boxes tag is used.