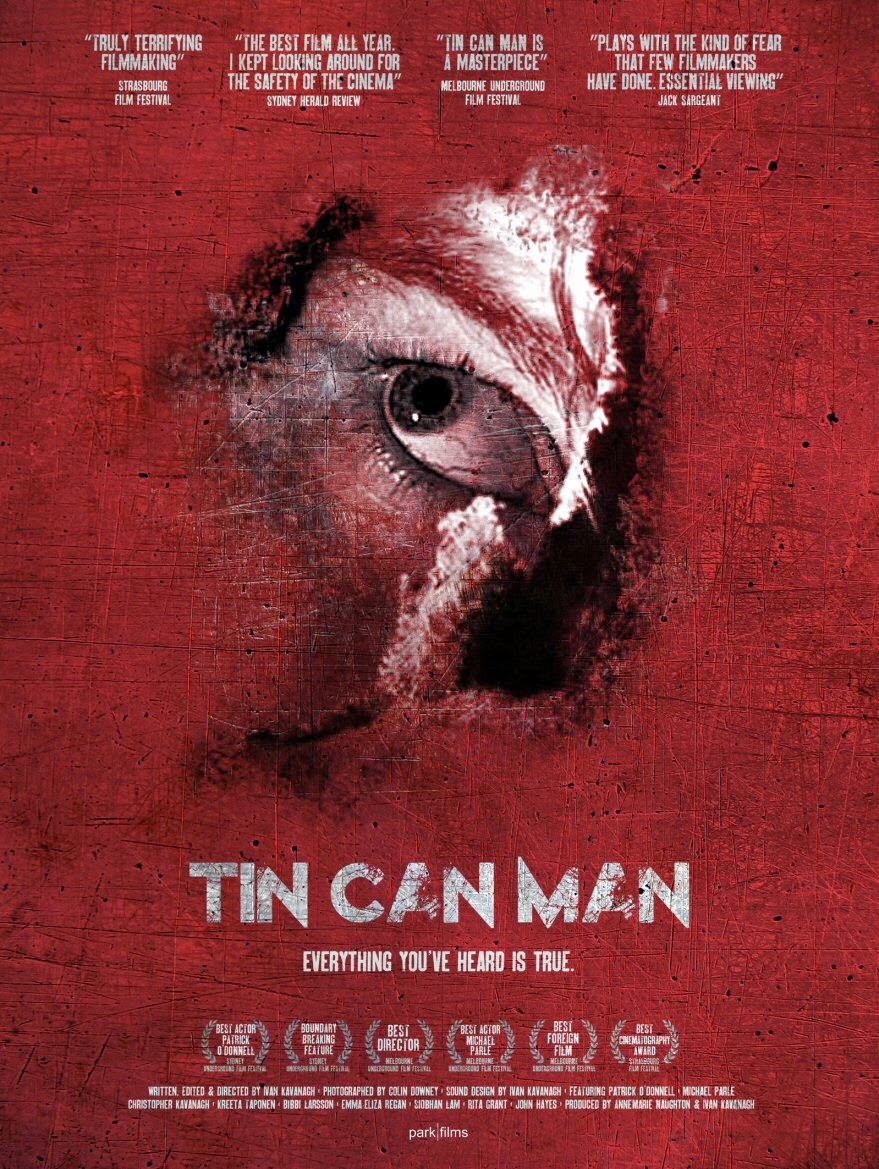 Not two minutes after finishing Tin Can Man, we were watching something else. It's not that Tin Can Man is gross or disgusting or distasteful, but something about it left us feeling, I don't know, yucky, I guess.

Tin Can Man played a whole bunch of festivals, so I thought it had to have some merit. But no. No merit. Unless you consider David Lynch fanfic meritorious. Tin Can Man looks and feels like a student film made by a guy who really likes experimental film, horror movies, and David Lynch. That's me being complimentary.

Me being less charitable reads like this: Tin Can Man is a confused art project made by a guy who hates his audience, the film medium, and quite possibly himself, to boot.

Here's what happens in the movie:
-Pete gets dumped by his girlfriend and is reamed out at work
-A guy claiming to be his neighbour asks to borrow his phone because he had an "accident" and can't use his own phone to make a call
-The neighbour reveals he's not really Pete's neighbour, and that he killed the real neighbour
-Pete and the fake neighbour visit Pete's dad where the fake neighbour introduces himself as Dave
-Dave tells Pete to kill his dad, and Pete refuses
-Dave takes Pete to meet the Tin Can Man, whom Dave kills after forcing him to dance around
-Dave takes Pete to meet his family where they force feed him cake
-Dave turns Pete into the new Tin Can Man
-Pete tries to escape and stops a motorist, who promptly returns him to Dave
-Pete "performs" as the Tin Can Man, which I think is some kind of fever dream but I can't be sure because nothing in this this movie makes any sense so it could be that Pete really is introduced by a clown to an audience of people from his life, and that he really does take the stage and bow to great applause

Now would be the part of the review where I explain what all this means, but I'm not going to do that because I don't know what it means. Moreover, I truly believe the whole thing is completely meaningless. There's no story here, no logic or thought process. There's just Pete who completely fails to learn or grow, and Dave who just talks a lot of nonsense and yells.

Also the whole thing is lit by flashlight. Which really has nothing to do with story, but goes some way in validating the whole "experimental" angle I'm pushing. And experimental film, in my experience, has little interest in storytelling.

I can't fully explain why I disliked Tin Can Man so much, why it made such terrible impression, and left me feeling icky. I have very little time or patience for experimental film, and although I, too, was once a pretentious film student, I got over it. So that likely has something to do with it--why I roll my eyes and make exasperated noises at the mere mention of Tin Can Man. Whatever writer-director Ivan Kavanagh's problem is, he needs to get over it, too.

The poster claims the movie is "truly terrifying" and a "masterpiece." It's not scary, nor does it showcase any sort of mastery of the cinematic medium. Difficult to watch and impossible to appreciate, Tin Can Man is bad art masquerading as genre film.
Posted by DM at 15:22

pretty sure "It's not scary, nor does it showcase any sort of mastery of the cinematic medium." and/or "Difficult to watch and impossible to appreciate" wouldn't get as many people to watch the movie.

I would so love to see a poster with those testimonials. "Utter crap." "The worst movie to come along in years." "Up yours, audience."

I kinda think you did tell us why you dislike the film as much as you do.