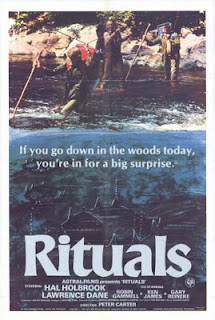 Oh, Canada.  Your filmmaking incentives are the foundation upon which the contemporary American film industry is built.  But, Canada is also capable of making its own movies and they're not all about weird sex.

Rituals, for instance, is about five friends on a hiking trip getting stalked and killed by a crazy person.  Any comparison with Deliverance glosses over the film's unique handling of the situation.  Also, no one gets raped.

What begins as a week-long hiking trip for a group of old friends turns into endless days of torture and fear as the group is slowly culled.  The film follows the men as they try desperately to extricate themselves from their terrible situation, but there is little hope of them surviving either their attacker or the vast Canadian wilderness.  The situation is dire, the outlook bleak.  And it just keeps getting worse.

With little remorse or redemption for its characters, Rituals offers little more than an exercise in torment and survival.  But it's a tense, compelling film.  Unlike similar, later films, Rituals offers an attempt at understanding its cruelty, and its characters are heartbreakingly human.  In the midst of all the chaos, there is time for grief, and the film mourns the passing of its unfortunate heroes.  Some die in spectacular, horrifying ways.  Others in mundane accidents, but no one person's death is any more or less tragic.

Rituals is, in a word, merciless.  But it is not senseless, either in its story or violence, and I think that is what elevates it above your run-of-the-mill killbilly fare.