Drink in the Horror

On a recent Avod (Ep 84), Count Vardulon and I briefly discussed beer labels.  That conversation got me thinking partly about how I need to buy more beer, and partly about beer label art and design.  Not strictly under the purview of horses and barely, beer labels feature all kinds of images and the devil figures prominently in a number of them.

Canadian brewery Unibroue, famous for its fortified beer, produces Maudite (damned) and Trois Pistoles (three coins), among others.  The names and art for these two labels are inspired by French Canadian folktales, La Chasse-Galerie, and the legend of the church in the town of Trois Pistoles. 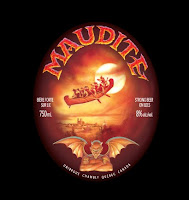 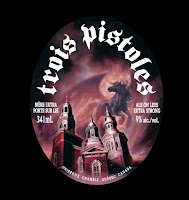 Click the images to hear the tales that inspired the beers.
Avery Brewing, from Boulder, Colorado, has been brewing beer since 1993 and is host to a trifecta of beers called the Demons of Ale: Samael's Oak-Aged Ale, The Beast, and Mephistopheles' Stout.  The Beast and the stout are particularly special because they are brewed once a year, on August 1st and December 1st, respectively.

Samael's is 15% abv and tastes like vanilla spice with little carbonation.  The Beast is a deep, dark red colour with a sweet, dark fruity taste.  Mephistopheles is pitch black and tastes like the 16% abv that it is, with just a hint of chocolate, coffee, and nuts.

Although it has an Irish name, Daibhal, this Belgian ale is brewed in California by the Rabbit's Foot Meadery.  Made with a generous amount of honey, the beer won a gold medal at the 2009 International Mead Festival. 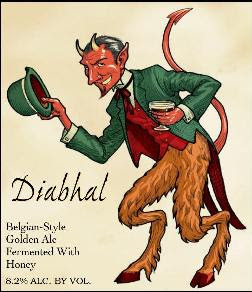 Diabhal is sweet-tasting with low carbonation.  Low on hops. 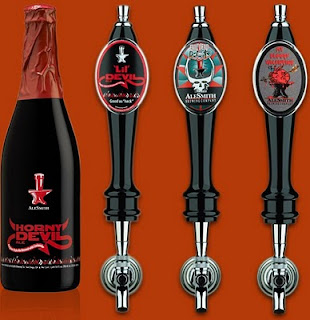 
Though not a devil, the hobgoblin of Wychwood Brewery, UK, is famous for being the first label in the country to feature an image as opposed to just the name of the beer.  Initially brewed for a wedding, Hobgoblin became Wychwood's biggest seller, and is the 5th highest-selling beer in the UK.  Wychwood now also brews King Goblin, a beer brewed under the full moon.

"As the full moon casts its eerie light over the shadowy old Eagle Brewery, a magical brew gurgles forth from the casks."
Returning to Canada, we find perhaps some of the most artistic labels.  The microbrewery, Dieu du ciel! (God in heaven!), produces a number of beers, one of which is Corne du diable (horn of the devil).  The label features a gentleman devil in profile, with a forked beard and a horn, holding his namesake beer.  He is enclosed by an ornate arch supported by two small angels.  The arch appears on all the brewery's labels, and all are equally interesting.  Other brews by Dieu du ciel! that feature uniquely creative designs are Peche mortel (mortal sin) and Rigor Mortis, both award-winners.

There are, of course, many more beer labels that feature the devil or some other horror-inspired art, and some breweries are even named after the devil himself (Duvel and Satan, for example).  Like wine marketing, specific beer marketing techniques--labels that feature curious names and art--are generally aimed at younger consumers, hoping to establish brand loyalty as drinkers mature.  Moreover, unique designs help microbreweries distinguish themselves.  But with the increase in devilish inspiration, one wonders if the market is maybe over-saturated with satanic brews; is the devil you know truly better than the one you don't?  Only taste will tell.
Posted by DM at 10:50

Email ThisBlogThis!Share to TwitterShare to FacebookShare to Pinterest
Labels: beer, deliciousness, The Devil