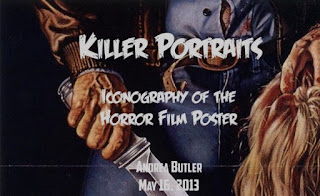 The long and storied history of film marketing and publicity can be summed up in images. On May 16, at the Black Museum's final lecture in its second semester, Andrea Butler discussed the evolution of movie posters in general and horror posters in particular. The purpose of the movie poster hasn't changed much over the years, but how the posters meet that purpose have.

Movie posters evolved primarily from the carnival poster. Although "higher" forms of art and entertainment used posters for advertising, film wasn't regarded on the same level as the theatre therefore its marketing campaigns took after the spectacle associated with more plebeian diversions. The first posters merely advertised the fact that movies were being shown and focused on engaging the audience through spectatorship. 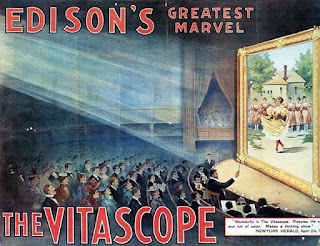 Over time, as film became less of a novelty, the attention shifted away from the audience and toward film content. Early 20th century movie posters used scenes of violence to titillate and attract viewers--it didn't  matter if the movie was violent or not, the lurid images displayed on the film poster brought people to the cinema. Eventually, the violence on display--and the fraudulent use of violent images--caused an uproar and poster art was standardized in 1915.

Around this time, the star system was gaining momentum and that had a huge influence on poster art. Film had gained legitimacy and where before stars were disinclined to have their names and likenesses used for film advertising, there were now the focus of marketing and publicity campaigns. This gave birth to the "disembodied floating head" poster design, which is still used today.

Throughout the 1930s, the decade in which horror really thrived and came into its own in America, horror movie stars became inextricably linked with their characters. Not the heroes, mind you. But the monsters. Here is where the image became the icon. Bela Lugosi and Boris Karloff were recognized for their performance as the villains, and their names, faces, and characters were conflated for the purposes of selling the audience on the movies; the bigger the name and face on the poster, the bigger the star. This same decade also introduced the image of the woman in peril. 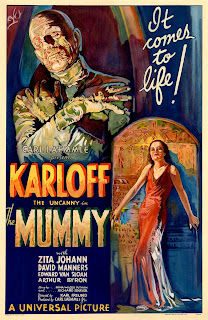 Poster art changed again in the 1950s. This was the era of the B-movie, when science and technology featured heavily in the story as a force of evil. The star system was in decline and so posters began to shift away from recognizable faces. The monsters themselves became the the focus of poster art, as well as fear. Here, too, advertisers started calling out to the audience through image and text. The only real exception to this rule of monsters was Vincent Price. His face and name appeared on his movie posters, while other actors were simply billed in a cast list.

The mid-century gimmick movies involved the audience directly as participants in the cinematic experience, and these movies' posters were equally engaging. Posters dared the audience to see the film and advertised the kind of experience they would have at the movie theatre. 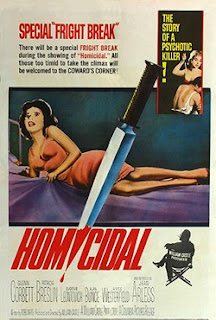 With the capture of Ed Gein at the end of the 1950s, serial murder entered the American consciousness and made its way onto the silver screen. Horror movies in the 1960s featured human killers and lots of gore, and their posters were similarly lurid. The Hayes code was still in effect for much of the 60s, so the violent images were relatively small, while most of the posters' real estate was held over for text. Playing opposite the gore films was a more emotional and cerebral horror, and their posters showed equal restraint. Appealing to the audience's imagination, these posters hinted at horror and violence instead of displaying it for all to see.

With the 1970s came an end to restraint. Horror movie posters went whole hog with the violence and gore: eviscerated bodies, the insides on the outside, enormous monsters, and women in deadly peril. But the more human the monster became, the more complex his representation in poster art. Whereas in earlier decades, the humanoid monster's face was used as a lure, in the 70s his face was hidden from the public. The implication is that anyone could be a monster in disguise.

Since standards for movie posters had long since disappeared, filmmakers could use any means to advertise to their audience. But still the formulas established in earlier years held sway. Posters still called out to the viewer, still used text to communicate the horror. A few movies did head in new directions, using holiday associations and focusing solely on the victim or the weapons used. 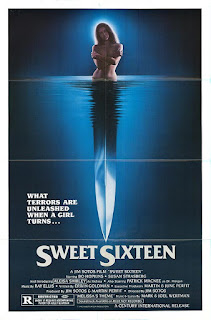 The 1980s saw it all, human and non-human monsters in the city and in the home. Old monsters were re-imagined for a new society and the 80s horror posters ran the gamut from traditional hand-drawn to more modern photographic images. Some posters focused on the victims as in the 70s, while others were more suggestive like in the 60s. A new trend took shape in the representation of the female body in which women's bodies were integrated into images of weapons and other objects.

80s poster art circled back to the 20s in which the monster transformed into an icon. This transformation is seen in the poster art of the franchise films wherein the killer is first obscured or not seen at all, and then becomes the dominant image in the films' advertising campaigns.

Unsurprisingly, the dearth of good movies released in the 1990s resulted in a slew of uninspired movie posters. The early posters of the 21st century weren't much better, and the photographic imaged dominated one-sheets across North America. A couple of notable exceptions include The Rites of Spring and House of Devil, two films whose posters were reminiscent of the art seen in earlier decades. 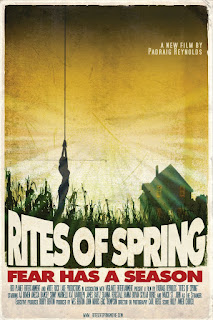 Today's poster art runs the gamut from bland to inspired. Artists working at the higher end of the sliding scale are mixing mediums, using typography to great effect, or hand-drawing images in their entirety. The advent of commissioned art for screenings is also contributing to the growing pool of fine poster art. Although commissioned art exists for fans, rather than as advertising for upcoming features, these posters prove there is a market for good commercial poster art.

Movie posters are artifacts of popular culture and, to a greater or lesser extend, represent the social and political climate of the films' era. The posters' images changed over time, though the purpose of the movie poster has always remained the same--to persuade the spectator. How exactly movie posters accomplished that goal depended on the dominant culture mores and attitudes of the time. Some posters pushed the enveloped, others simply copied an established format. Regardless of the movie poster's overall success as an artistic medium, they did manage to capture the essence of their films in one image, turning that image into an icon of popular culture.
Posted by DM at 17:42

To be fair a lot of dime novel covers featured women in peril before the Civil War.