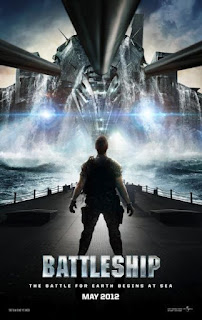 How ridiculous! Of all the board games. Not Life or Monopoly. Not even Candyland. I suppose, technically, Battleship's not a board game, and I guess it does lend itself to countless naval warfare scenarios...

Anyway. Battleship is a great movie. And by great I mean entertaining. Loads of fun to watch, Battleship is an action spectacular chock full of amazing special effects. The film does drag a bit at the start, but just enough plot to keep you engaged, and once it gets going it doesn't let up.

On his birthday night, shiftless Alex Hopper gets into a pantload of trouble. Alex's older brother Stone, sick of Alex's shenanigans, enlists him in the Navy and before you know it, Alex is Lieutenant with a bright future. The only thing standing in his way is his ego. After an unfortunate series of events involving a soccer game and a trip to the head, Alex learns he's at risk of being kicked out of the Navy; it finally hits him--too late--that he fucked up. Once the fleet returns home from their war games off Hawaii, Alex will be court-marshaled. But a timely and cruel twist of fate will instead see Alex and his ship separated from the rest of the fleet, forced to do battle with an alien enemy. Outgunned and outclassed, Alex has to learn to be a responsible, humble, and shrewd leader if he's going to save his crew along with the rest of the world.

Really, it's a story you've heard many times before. Only this version has more explosions. Seriously, everything blows up in this movie. And as well it should given it's based on a game whose sole objective is to blow up your opponent. 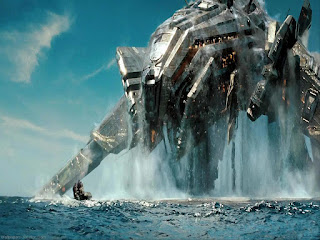 You're going to need a bigger boat. With a bigger gun.

Battleship does justice to its namesake in a number clever of ways. Firstly, there is the alien artillery. Designed to resemble the game pieces, the alien ordinance looks like large metal cartridges or shell casings. These penetrate the naval vessels, landing on deck or piercing the ships' sides, exploding about thirty seconds after impact. Just like in the game, not all hits are kill-shots, but they still do significant damage. Secondly there's the board. Battleship the game is played on a grid. In the film, an alien force field encloses a handful of boats and the rest of the fleet is unable to penetrate the barrier. Since the aliens are invisible to radar, the marines must find another way to track their targets, and the script calls for a rather ingenious plan of tracking the aliens on a specialized grid. Finally, there is the titular battleship itself--both a figurative and literal interpretation of the word.

By rights, Battleship is probably a better film than it should be. In the wake of three successively disappointing Transformers movies, Hasbro seemed to be taking a big risk with this one. And who could possibly take it seriously? It's Battleship, after all. But the film doesn't pander like its predecessors, and although it's just as over-the-top, militaristic, and patriotic as any Michael Bay movie, it isn't sanctimonious or high-handed. In fact, it's kind of funny. On more than one occasion the film uses humour to point out ethnocentric ignorance and to discredit a bloated, self-indulgent American bureaucracy. Although the film is outrageously (outlandishly?) pro-military, it lacks the sting of a vaguely pro-stratocrasy plot.

My only real problem with the film lies with one character in particular, the geek. It shouldn't surprise me that in a film populated with stock characters, archetypes, and stereotypes, the nerdly scientist should be so...nerdy but it bothers me that his character is so typically spineless. Indeed, he has a funny line or two, and a single brave moment helps turn the tide, but I'm tired of watching spindly, unkempt geeks cower in the face of danger. Jeff Goldblum did a lot for talkative nerds when he blew up the mothership and fought the dinosaurs, but not enough apparently.

Irritating schtick aside, Battleship is a worthwhile film. I'm worried it won't receive the attention it deserves and, like John Carter (Taylor Kitsch plays Alex Hopper in Battleship so maybe it's his fault, I don't know) it will suffer for lack of proper marketing. The movie needs to be seen on the big screen--it's an event film much like The Avengers but is missing all the pageantry and promotion that usually accompanies blockbusters. It makes me think the studio has no faith in its product, which is just shameful. If you only see two movies this spring they should be The Cabin in the Woods and The Avengers, but if you see three the third one should be Battleship. 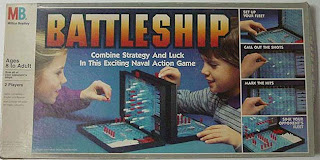 Cheaters are court-marshaled. They don't tell you that in the rules.
Posted by DM at 14:37