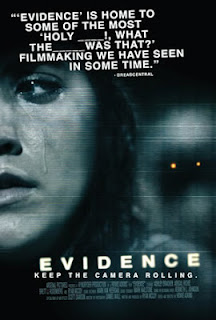 That's not meant to be a compliment.

Early reports suggested it might be evidence of UFOs or aliens.  But the found footage film Area 51 had that covered.  So that left...pretty much everything else (i.e.: ghosts).  The trailer, of course, gives it away (it's not ghosts).  Which left me with nothing to do for 90 minutes but watch, in growing annoyance, as screaming girls filmed their own deaths.

All found footage horror movies are basically the same: people are filming "life" as it happens and they catch something scary on tape.  And it wouldn't be a horror film if no one died horribly, so those deaths are captured, too.  The reasons why the tape exists vary--amateur documentary, investigative journalism, party video--but the results differ little across movies: the raw footage was found after the fact and entered into police evidence and, for some reason, we the audience are now watching that tape.

This is (almost) exactly the case with Evidence.  Ryan is filming his friend Brett's first camping trip.  With them are Ashley and Abby.  They hear strange sounds at night and the following day capture some weird animal on tape.  Despite everyone being freaked out, Ryan bullies his friends into staying, which results in the expected running-away-in-the-middle-of-the-night.

And this is where the movie takes an unexpected turn.  Instead of the characters just getting killed off by monsters in the woods, they literally run into even more trouble.  I have to hand it to the movie, it successfully subverted my expectations for low-budget FF, but I was disappointed when "the whole truth" was revealed.  What started out as a bad, but interesting, journey into the California countryside ended up being a derivative mishmash of horror movie subgenres.

Evidence has a reasonably good premise, and great monster design, but it seems almost as if it happened by accident.  The bigfoot-type monsters we first encounter are not the primary monsters in this film--they're just the appetizer.  Evidence's main course is a facility overrun with genetically engineered crazy people.  Much like the people who made Wrong Turn 4, Evidence's filmmakers were too dumb to understand they had, for just a moment, created something special.

This is the sad reality of indie FF: a lot of them are just bad.  Not all are Paranoid Activity 2-level bad, but a great many are predictable immitations of better films.  Thing is, FF is an easy way to make a horror movie--and there's nothing wrong with that--but most indie filmmakers working in the genre either don't understand its potential or have the skill to do something interesting with it.

And by skill I mean writing ability.  FF is a great venue to showcase special effects, and Evidence makes good use of its platform, but the writing is just terrible.  The biggest issue in all found footage is how and why the film exists in the first place--why the crap are these people still filming in the face of all this danger?  In the case of Evidence, it's not as if they're using the camera for its night vision, nor are they concerned about keeping a record of what's happening.  Evidence displays no creativity in maintaining it's FF conciet, nor does is explain why we're watching it.  Terrible film The Last Horror Movie was at least able to work the audience into its plot.

Evidence is by far not the worst FF movie I've seen, but it's inability to be any good makes for one frustrating viewing experience.
Posted by DM at 17:39