When I saw the trailer for this one, I thought I'd make fun of it as one of my trailer reviews.  I had it all planned out: Christian Slater blah blah killer video blah blah The Ring is overrated.

Truth be told, I like the idea of a movie that drives people crazy.  Sadly, Playback isn't about that.  It's about a videotape that drives one guy crazy, possessing him with the evil soul of a long-dead Satanist.  Don't be fooled by the IMDB synopsis.  There's no police investigation, no missing teenagers, and very little of the film has to do with an heir to evil.

As a project for journalism class, Julian and Riley try to dig deeper into the tragic and violent story of Harlan Diehl.  Back in the 90s, Harlan videotaped himself as he murdered his foster family.  The town has moved on, but Julian is determined to dredge up the past and he asks a friend at the local TV station to find some old footage from the crime scene.  Quinn digs out an old tape, and when he watches it, he is possessed by the murderous spirit of Harlan Diehl, and starts killing Julian's friends.  Meanwhile, Julian suspects he might be Harlan's illegitimate son.

Yeah, that's right.  Julian may or may not be the son of an insane spree killer.  But it doesn't really matter because Harlan's spirit can obviously possess whomever it wants.  To make matters dumber, Harlan was the descendant of a pioneering filmmaker, credited for inventing the movie camera, and stealing the souls of the people he filmed.  A Satanist at heart, the filmmaker imbibed one of his films with his own evil spirit so that he might jump into his son's body when he watched the film.

Right about now, you're probably wondering where Christian Slater fits in to all of this.  He plays Officer Lyons, a local cop who pervs on Dee Dee, one of Riley's friends.  That's it.  He is of no consequence to the plot, and serves only to lower the tone of an already bad movie.

Playback is little more than a vehicle for a new batch of would-be "teen" movie stars, but the film is so unfulfilling as a teen slasher, I doubt anyone will take notice.  Some plotlines are unresolved, while others are largely inconsequential.  Moreover, no one knows they're in danger.  There's nothing on the line, no suspense, and no hope for a satisfying denouement.

On the plus side, Playback calls out shakeycam.  But the movie as a whole is too self-conscious to be clever.  I hesitate to lable the film as wasted potential, but it kind of is.  Check it out: a secret adoption, a weird silent film, a family anhilator, and the supernatural.  All great stuff.  But playback almost purposefully refuses to be a good movie.  Instead of mystery, there's exposition.  In place of atmosphere is a sickly-looking villain.  At least the characters are all friends, and no one's a jerk for no reason.  Still, the movie is irritatingly mediocre, relying on tired cliches and genre tropes to tell its story. 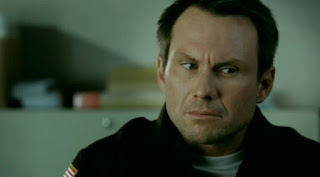 I know, Christian Slater. I'm confused about why you're here, too.