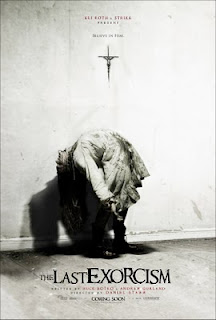 The horror documentary--a brilliant bit of filmmaking if done right, a curious experiment if not.  Either way, the mocumentary filmmaker is ahead of game because idea itself so novel.  For starters, the documentary format precludes any notions of disbelief--it goes step further than the mere willing suspension of disbelief, and presents itself immediately as "real" and "true".  Following on that, documentaries are, quite often, understood to be authoritarian and decisive and their content is therefore considered to be the "most" real and "most" true.  For these reason, the horror mocumentary is in a unique position compared to other genre entries.  Not only is its audience more ready to believe right away in its story and characters, the audience is more likely to invest itself in the proceedings because there is less of a separation between the real people watching and the "real" people on screen.

The Last Exorcism initially succeeds in recreating the look and feel of a real documentary, but ultimately fails to maintain that verisimilitude.  The film is hampered largely by its ending, which manages to destroy the reality of the documentary format.  We're not talking Last Broadcast-levels of narrative sabotage, but upon termination, The Last Exorcism ceases to be "real".  Additionally, the film also suffers from sloppy writing, though only in parts.  Characters are good, direction is good (with exception of a couple of staged scenes), and plot, for the most part, is good.  The film is worth watching. 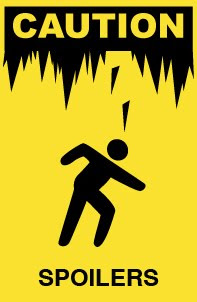 The premise is this: Reverend Cotton Marcus, with a documentary crew in tow, heads into the Louisiana backwoods to perform an exorcism on a teen-aged girl called Nell.  It seems like a fairly straight-forward affair, but about ten minutes in, the film faces a bit of a problem.  Namely, its very premise teeters on the brink of total annihilation because Marcus is a showman and doesn't believe in exorcism.  He may not even believe in God.  Marcus reasons that if God exists, then demons exist, but since Marcus doesn't believe in demons, the unspoken conclusion is that he also doesn't believe in God.  Exorcism is a scam, Marcus explains, and this had me worried--what is this documentary about, how and why is it being made?  My fears were laid to rest when Marcus reveals that he hired the documentary crew to film him while he performs one last exorcism in which he intends to prove demon possession is make-believe.

This, of course, is a rather uninspired set-up for demon possession being real.  And, in what may or may not be a twist end, it is.  Pedestrian is too harsh a term to describe The Last Exorcism's plot, but its simplicity lent it a potential that wasn't fully realized.  The film, like all others of its ilk, deals with themes of psychology and sex, and goes one step further to take on sexual abuse.  Although he's a small-town preacher, Marcus is no slouch.  He understands the intersection of religion and psychology and knows that he can and has helped people in the past with his "exorcisms".  In the case of Nell, the initial exorcism doesn't work and Marcus chalks it up to deeper psychological problems, likely brought on by abuse at the hands of her depressed alcoholic father.  All this is good stuff and the film touches on the subject of religious mania in a way not seen since Agnes of God, but it falls short of making any meaningful point about beliefs and reality precisely because demon possession is proved true.

The last twenty minutes or so of the film is a series of revelations, the first being that Nell is pregnant.  Following that, Nell admits to having sex with a local boy, Logan.  It would appear the film is over at this point.  Marcus has proved his point about "demon possession" and Nell's father, who adamantly believed his daughter was at the mercy of the demon Abalam, has accepted the truth about Nell.  Were the film to end here, it still would have been an interesting, if maybe a little anticlimactic essay on religion.  But when Marcus learns that Logan is gay, his returns to Nell's house only to find her tied to an alter in the woods, at the centre of a Satanic mass.  She gives birth to a monster which is promptly sacrificed to the cultists' god.  Marcus, now faced with incontrovertible proof that demons exists, must accept that God, too, is real.  He charges into the midst of the Satanists, cross raised high as the documentary crew flee into the woods.  First the sound recordist is killed, then the camera man.  Roll credits.  This ending is not only predictable, it's expected.  And it has the unfortunate effect of destroying all pretense of the film being real. 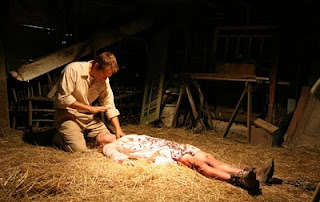 The film lacks a framing story.  There is no disclaimer at the start of the movie describing how we're watching found footage.  So when the cameraman dies and the movie ends, the audience is left to wonder how and why this film was released; it would be in the Satanists' best interest to destroy the video. The head Satanist himself knew Marcus was filming a documentary, but the film, through its very existence, gives him no credit.  And this is a community that exists right under the noses of the entire county population.

I mentioned, too, the ending was expected.  The film heavily foreshadows how each person will die--the presence of demons being a foregone conclusion.  Nell is a bit of an artist, and while in her possessed state, she made a collage that depicts Marcus facing off against a fire, the recordist in pieces on the ground, and a decapitated cameraman.  Discovery of the picture prompts a brief discussion about whether Marcus and co. should just leave the house.  The consensus is to stay.  Later on, when things get weird and dangerous, no mention is made of the pictures, no thought given to their portents.  So, in the same way the film refuses to give credit to the Satanists, it also fails credit the heroes with any cunning.

This total lack of self-awareness is further apparent by Marcus' reference to The Exorcist.  He's seen the movie but he and everyone else fail to recognize their own horror movie-like experience.  This handicapping causes problems later on when the film devolves, spiraling downward into predictable behaviour patterns.  People stay when they should leave, and rationalize when they should freak out. 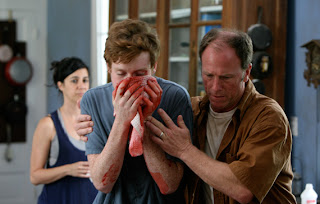 The film isn't all sloppy writing, and the writers prove themselves to be entirely capable of creating some complexity through delayed pay-off.  Nell's brother, Caleb, might be the best written character in the movie, although he has a relatively minor role.  At first he antagonizes Marcus and when he finds out Marcus is a fraud, accepts him.  When Caleb asks Marcus to protect Nell from their father, everyone believes this is because Dad might be a child abuser.  But Caleb's motivations are different than what they appear to be.  At the end of the movie, Caleb is revealed to be a Satanist.  Only then do we realize that Caleb wasn't protecting Nell out of brotherly love, he was protecting her fetus out of loyalty and devotion to Satan.  Sadly, Caleb is the only example of deeper planning and forethought in The Last Exorcism as they relate to character.  It is my sincere hope we see more writing like this in the future.

But for the present, we have to contend with half-finished characters and a plot undercut by its premise.  That's not to say The Last Exorcism isn't interesting, it's just not exceptional.  Demons exist, a fact suggested by the film's title, and made clear toward the end of the movie.  But when the end comes, demons seem old hat.  Well, of course it's Satanists.  What else could it be but Satanists?


If the writers knew their Lovecraft, they could have mined that well for a truly creative twist to their story.  Early in the film, the documentarians stop to question some locals.  Here, the idea is planted that cultists exist somewhere in the woods.  This is then quickly downplayed by the suggestion aliens once landed nearby, and the "streeters" scene is meant largely as a friendly ribbing of gullible, unsophisticated country folk.  But still, the notion of cults is lodged in subconscious and it is vindicating to learn there really is a group of evil cultists chanting dark rituals betwixt the trees.  Only it's Satanists when it should, in fact, be the cult of Cthulhu.

In "The Call of Cthulhu", Lovecraft establishes the bayou as a major centre of Cthulhu cultism, and in "The Dunnwich Horror", he details how a person might be impregnated by Yog-Shothoth.  In The Last Exorcism, Nell has been impregnated by a demon, and the cultists hold a ritual in the Louisiana backwoods to birth the baby and bring forth their dark lord.  All the elements necessary to create a Lovecraftian tale of horror are there, but by either accident or design, the movie tragically falls short of the mark. 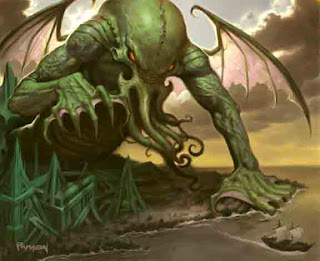 In spite of these criticisms, the film is, as I said, worth watching.  Where most other recent horror mocumentaries are found-footage type movies, this one is structured as a professionally filmed and edited doc.  Although it suffers a from a self-terminating logic problem, and some bad writing, everyone turns in a good performance and it's always interesting to see how filmmakers develop themes of religion, faith, and belief
Posted by DM at 16:29

Dude whoever is saying the Last Exorcism wasn't good does not have good taste in movies, I am going to see it again me and my husband both loved it!! http://bit.ly/b1KYJP