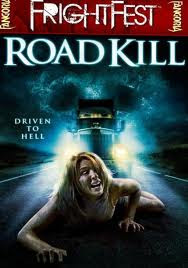 There's this weird thing about Canadian cinema.  It feels like it needs to be distinct in every conceivable way from its American counterpart.  Or that used to be the case, at least.  Since the collapse of the tax shelter incentive until just recently, Canadian film sought to push an aesthetic agenda of moral ambiguity.  I can't tell you whose great idea it was to present to the world a cinematic culture based on bleak visual metaphors (it was probably Telefilm), but their time is slowly coming to an end as Canada is now starting to turn out fewer downers.

This is all just a preamble to help contextualize my thoughts upon viewing the first few minutes of Road Kill.  They went something like this: "Canada should be looking to Australia for lessons on how to make a horror movie.  I've seen some great horror coming out of Oz."

The first few minutes of Road Kill feature some wonderful cinematogrpahy that truly captures the isolation of Australia's Outback--a landscape just as remote and beautiful as the Canadian wilderness (which, by the way, takes up a lot of the country).  Unfortunately, due to some terrible writing, the film quickly squanders its promise.

The premise isn't all bad; it's about a big rig that harrasses and then possesses four kids on a camping holiday in the Outback.  If that sounds at all strange, look at this way:  If you're going to make a movie about an evil truck you generally have to pick one of two options, Duel or Maximum Overdrive.  Road Kill opts for the latter, but with a twist in that the truck is actively searching out potential new drivers.

The content is interesting overall, but the movie has so many problems that neither its premise nor its cinematography can make up for the glaring errors in plot and character.  One of the first lines of dialogue uttered makes little sense given the situation, and it only gets worse from there.  The film's internal logic is a complete mess--and I'm not talking about a quasi-sentient truck that also happens to be vehicular manifestation of Cerberus.  I mean things happen that are either a) impossible or b) never explained.  And it's not a case of deliberate vagueness, rather the film exhibits a kind of lazy ambiguity; what might have seemed obvious to the writer is not at all apparent to the viewer and yet somehow the director failed to notice the discrepancy.

Road Kill is one of eight titles released under the Fangoria Fright Fest banner--Fango's answer to Afterdark Horrorfest.  I've already seen one other FFF title and it, too, was a let down.  But if Afterdark could score a couple of hits with Mulberry Street and Lake Mungo, there's hope for Fango.  In the mean time, I'll keep watching Ozploitation but only because my beloved Canada has yet to fully shed its suffocating cinematic cocoon and emerge a new creature.
Posted by DM at 18:22

I agree that very good cinematography not only in intial scenes but in entire movie.Road kill is an excellent work which has story and performance which make you stand up.