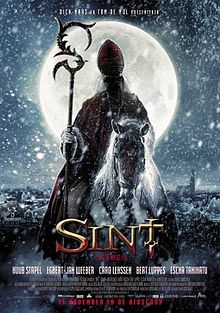 Sometimes I'm an idiot.  Like, really very dumb.  It stems from a place of ignorance, which is a little ironic given how arrogant I am about my knowledge and intelligence.  But the fact of the matter is, I (sadly) don't know everything about horror, and I really don't know much about European continental horror.  And if I'm being honest, I'm not always keen to watch and learn, either.  I gotta be in the right mood.  You know what I mean.  But when first I heard about Sint a year ago, I was immediately sold on the idea of a Dutch horror movie about an evil St. Nicholas.

The Dutch "Christmas" is St. Nicholas Day, which falls on December 6.  The night before and the day of celebrate St. Nicholas' birthday, during which he brings presents to all the good children.  According to legend, bad children are rounded up by his helper, Black Peter, placed in sack, and shipped off to Spain.

Sint spins a much darker yarn.  In it, the generous Sinterklaas of legend is recast as an immortal Bishop hellbent on murder.  When the full moon shines on December 5, St. Nicholas arrives to exact his bloody vengeance upon Amsterdam.  Goert has seen Sinterklaas in action, and he's done his best to warn his colleagues at the police about the danger, but they all think he's nuts.  So when people start dying after sunset on December 5, no one's quite ready to accept that Sinterklaas is to blame.

From what I understand, The Netherlands doesn't produce a whole lot of horror, which leads me conclude the country hasn't developed its own special genre aesthetic.  But still I was surprised by Sint's straight-up slasher nature.  Stylistically the film follows American horror conventions, but it isn't stupid, insipid, or insulting to its audience's intelligence.

Except for the part where they describe St. Nicholas' ship as a schooner.  It's clearly a carrack.

Sint is a fun watch, and is fairly imaginative by North American standards.  The gore is delightfully ridiculous, and the movie maintains a fairly light tone.  Of importance to this reviewer is the fact that Sint doesn't make a big deal about religion or morality, which I found both surprising and refreshing.  The film does end on a bit of a down note, which brings it more inline with what I assume is a Dutch tradition of downer or ambiguous endings.

This holiday season, if you're looking for something in the evil Santa vein, but with a bit of a twist, this Dutch take on a Christmas horror tradition is well worth it.  Foreign without being alienating, Sint is also good movie to broaden your scope of European genre film.

For other Xmas alternatives, check this out!
Posted by DM at 14:28