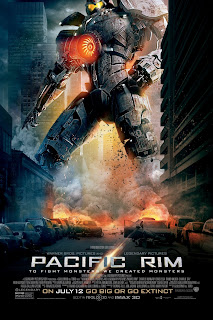 Pacific Rim is a great film, likely to be the best of the summer but it's getting some middling reviews. I know why. I can maybe even appreciate the reasoning behind the criticism. But I cannot, in good conscience criticize this movie. And I firmly believe that anyone who does find enough fault with Pacific Rim to warrant giving it a less-than-glowing review is an idiot.

Pacific Rim is about as simple as it gets: monsters attack, humans fight back. That's it. Sure, the fight against the kaiju takes its toll on personal and global scales, but that only gives reason and momentum for the rest of the story. And yes, the world of the film is populated by stock characters who speak their feelings, but there's little time for intrigue when that same world is at stake. Moreover, we're dealing with professionals, not teenagers, professionals who are fighting monsters from beyond our realm, not spies or terrorists.

You want intellectual drama? You picked the wrong season to go to the movies.

Other detractors will wish Del Toro had spent his time making Pan's Labyrinth again, but the fact is Pacific Rim is just as visually stunning and innovative as any of his other films. Just because it isn't a beautifully woven historical tapestry doesn't make it any less valuable. And Pacific Rim is gorgeous to look at, it's just a different kind of art.

More to the point, the film is dedicated to the memories of Ray Harryhausen and Ishiro Honda, the grand old men of monster movies. The tribute is not just embodied in the monsters, nor is it captured in humanity's fight for survival. Pacific Rim is reminiscent of earlier action films, long before the days of gritty realism, ambiguous moralities, and open-ended plots. Back then the good guys won and that was that. Action movies were violent, cheerful affairs that gave hope to the audience, and Pacific Rim looks to reclaim some of that glory.

All of the film's cheesiness, its relative simplicity and naivete, and its comic tone are in service of the genre--of refreshing a genre that's bogged down nihilistic action-dramas. There's no great emotional journey that takes place in Pacific Rim, nor does it challenge us to question ourselves. It's just a movie about giant monsters and robots.

Nice review. I wish there was more to the characters and the script, but at least the fighting and action was good. At least.

I must be a simple man, but I saw nothing missing in terms of story or character content. I am completely baffled by the fact more people went to see Grown Ups 2 in a movie theatre instead of Pacific Rim. I'm sure the quality of the film would not be affected if those people had just downloaded it on to their mobile device of choice and then thrown it out.