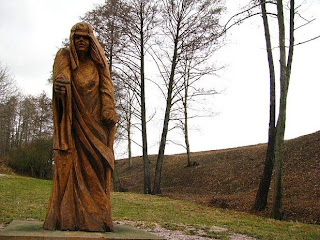 You're probably familiar with Danse Macabre. Even if you've never heard of it, odds are you've actually heard it before. I'd be willing to bet good money, however, that you've got no idea what The Noon Witch is all about.

I never knew such a thing existed until I was sitting in my car listening to Molto Monday which is the Monday edition of Tempo, a classical music program on CBC Radio 2. I don't usually listen to the CBC, so it was just my good fortune that I happened to tune in--no doubt fed up with my antiquated CDs and playlists. Anyway, much like Danse Macabre, The Noon Witch is a symphonic poem inspired by a narrative poem, "The Noon Witch" by Karel Jaromir Erben.

A woman's young son is misbehaving. She scolds him saying, "If you don't stop that, the Noon Witch will come and take you away." Her son calms down but only for a short while and the Witch arrives. Frightened, the woman scoops up her son and flees but she stumbles and falls, smothering the boy. As the noon bell tolls, the father comes home for lunch and the Witch disappears. He finds his family on the floor, his wife in a faint, his son dead.