Music to Excite the Savage Beast 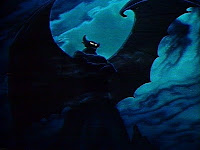 So I was driving around the other day, listening to the radio, when Beethoven's 4th came on.  Rarely do I listen to the radio when I'm in the car, but on those rare occasions when I grow bored with my CDs, I listen to one station and one station only: the local classical channel (everything else is Christian or worse, country).  The DJ paraphrased a description of Beethoven's fourth symphony as a Greek goddess sandwiched between two Norse gods, and as the music played, I thought on what she said.  Beethoven wrote a lot of powerful and evocative music; when John McTiernan was making Die Hard, he'd heard the Ode to Joy, and insisted the music act as a kind of leitmotif for Hans Grueber.  The music spoke to McTiernan (who didn't actually know what he was hearing) and he turned around and used it to speak to his audience, communicating Grueber's desire.

The Ode to Joy is, as it's name suggests, a joyful and triumphant piece of music.  The first movement of Beethoven's fifth, on the other hand, is both light and dark and its first four notes might be the most well known in history.  And then there are compositions that are just dark.  Horror is not, nor has it ever been, confined to words and pictures, and music can evoke moods and feelings that are sometimes out of reach of other artists.  I've here listed four musical numbers that conjure the darkness:

This is the fifth movement for a symphony written at a time when most symphonies had only four parts.  The music tells the story of an artist who's riding high on opium.  In the fourth movement the artist dreams he kills his beloved and this last movement, he sees her come for him at night.  The recognizable tune, that repeats a number of times, is the witch come to the artist's funeral.  This music was featured in Sleeping With The Enemy, and Julia Roberts' character hates it because it reminds her of her abusive ex-husband.  Wrote Berlioz about the emotional power of music, "Emotional (imitation) is designed to arouse in us by means of sound the notion of the several passions of the heart, and to awaken solely through the sense of hearing the impressions that human beings experience only through the other senses."

Grieg - In the Hall of the Mountain King

This iconic piece of music was written for the play, Peer Gynt, and is played when Peer, the eponymous hero, sneaks in to the Mountain King's castle and then as to escape the King and his trolls.  Originally, words accompanied the music but the "song" has gained popularity as a strictly orchestral piece.  The music has appeared in a number of movie trailers, including Corpse Bride and Funny Games, but, sadly, in few movies themselves.  It's loud, it's fast, and it's ominous.

O Fortuna is a medieval Latin poem written in the 13th century and set to music by Carl Orff in the mid-1930s.  The music was introduced to the mainstream in Excalibur (1981), and, like In the Hall of the Mountain King, O Fortuna has worked its way into popular culture and has been featured in the movies and on TV.  In the Kickass Classical forum, an introductory message reads: "If you're new here, and looking for 'that one cool classical choir song that they always play when something evil or scary or badass is happening,' the answer is O Fortuna."

One of my favourites, this piece of music is a symphonic poem, inspired by an actual poem by Henri Cazalis.  The music tells the story  of the Devil who, each year on Halloween, plays the violin at midnight while skeletons dance.  The piece is credited for introducing the xylophone to western culture and the music was featured in "Hush", a mostly dialogue-free episode of Buffy (Season 4, Episode 10).
Posted by DM at 10:54

DM you have a Great ear for music I am very impressed! Once again thank you for sharing you amazing insight.

Excellent post. The Orff piece was, for a while, THE go-to piece of music for action/horror/fantasy movie trailers. It still gives me chills.