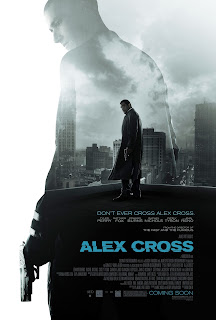 I've read exactly one James Patterson book and hated it. But I really like Kiss the Girls and Along Came a Spider, so when I first saw the trailer for Alex Cross, I was interested. And when I finally got around to watching Alex Cross, my interest quickly transformed into dislike, which then changed to annoyance and, finally, impatience.

What I'm trying to say is, Alex Cross sucks. But even worse, there's no good reason why. I mean yes, there are very clear reasons as to why it's a bad movie, but it didn't have to be. Huge story problems notwithstanding, Alex Cross is hampered by ineffectual and, at times, incompetent direction.

I hate shakycam. That's all me--I know that part of the reason why I don't like this movie is the shakycam. Totally subjective. Objectively, this is one of the worst uses of intensified continuity I've seen. And not only because if features slow-motion shakycam.

Intensified continuity is a stylistic treatment that derives from a combination of camerawork and editing. According to David Bordwell, the scholar who identified the technique, intensified continuity involves rapid editing, cutting between telephoto and wide-angle lenses, tightly framed dialogue, and a dynamic camera. Bordwell notes other camera techniques are often used by contemporary directors, but these are the four main contributing factors. For myself and many others, intensified continuity is largely characterized by an  extremely dynamic camera (shakycam), close-cropped action, and fast cutting.

The point is to immerse the viewer in the film, to make them feel present as part of action. I remember talking to my friend Mina about The Bourne Identity. We both really liked it, but I complained about the apartment fight scene. It's a great fight, I said, but the shakycam made it difficult to watch and appreciate what I was seeing. Mina disagreed, saying she felt like she was in the fight alongside Jason Bourne.

While I can, at times, appreciate the thought and feeling behind intensified continuity as a conscious, stylistic choice, I cannot for a moment respect the artistic vision on display in Alex Cross. The movie not only represents everything that is lost through intensified continuity, but demonstrates that some filmmakers completely misunderstand how it's supposed to work in the first place.

Compare the fight scene above with this one from The Avengers, paying special attention to Black Widow's fight with Hawkeye:

Here the shakycam is used sparingly, and up-close, tightly framed action is complemented by wider, steadier shots, which helps maintain a geographic sense of space and place. Pauses in the fight itself are accompanied by less dynamic camerawork, allowing the audience to catch its breath before the next round.

Alex Cross, by contrast, is so mired in its aesthetic that it borders on incomprehensibility. Even though both fights take place on a catwalk, The Avengers correctly employs wider frames and two-shots to help established the confined space whereas Alex Cross' use of just close-ups and slow-mo creates an incoherent, undefined space. Even when the characters are at rest, the camera shakes, offering no reprieve for the audience. Also, Alex fights dirty.

Instead of placing the viewer in the moment of the fight, Alex Cross disconnects from its audience through its mishandling of intensified continuity. This kind of incompetent pandering to Hollywood aesthetics is an insult to action movie audiences and filmmakers.
Posted by DM at 20:40

That was some extreme shakey cam alright. Maybe I just didn't see things right but it looked to me as if the blood on Fox's face just appeared for no reason (I didn't see any hit that caused it) and disappeared (apparently shaken off by the camera work) at random.

Hell, it took a few long shots before I was even sure there were only two guys involved - the lighting was crappy too imo.

Seriously, it's one of the worst things I've ever seen. Frigging Len Kabasinski does a better job than these guys.

Len Kabasinksi, you're most welcome! I enjoy your films :)