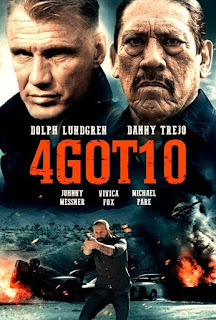 4got10 is a curiously terrible movie. There is no good reason why it's as bad as it is. That having been said, there are a number of bad ones.

To say the script for 4got10 is underdeveloped assumes a complete story to begin with. And assuming so makes an ass out of you. Not me, though. Because I know this story didn't get much past the idea stage before it was committed to videotape.

Brian wakes up shot and surrounded by bodies, with no clear idea of what's happened. The cops roll up and he pretends to be dead, eavesdropping on the Sheriff's plan to steal all the cash and blow on hand. Shortly after this scene plays out, Brian himself takes off in the van and drives...somewhere. He's following a route dictated to him by the van's satnav. When he get gets to his destination--which is some guy's house--he takes the guy and his wife hostage then sits down for a good think.

Meanwhile, the Sheriff is packing to leave town. He's in the shit after his foiled attempt to steal the van and is planning to get the hell out of Dodge. This plan is also foiled when Danny Trejo shows up at his house demanding to know who shot his son. Danny strikes a deal with the Sheriff: if the Sheriff deliver's his son's murderer and the stolen van with money and drugs intact, Danny will let him have some of the cash.

Meanwhile, Dolf Lundgren is a DEA agent investigating the shoot-out.

Meanwhile Brian has sex with the woman he's take hostage. Tuns out she knows him. Brian, of course, has no idea who she is.

It all comes to a head when the Sheriff arrives at the house where Brian's holed up. Shortly after he gets there, Trejo and his boys show up. A gun battle ensues. Brian survives, as does the broad. She takes off with a set of keys, keys that will open a locker at the bus station. It's where Brian hid the money before driving to the house.

Brian's too late to the bus station--the money's gone. But Dolf Lundgren isn't. He's in a parking garage, waiting for Brian. And now, finally, all the pieces fall into place. Or they would were this a better movie. Brian shoots Lundgren in the head and we're let in on the backstory.

Brian's an undercover DEA agent who brokered a deal with Trejo's lawyer's wife, aka the broad, to have her husband sent away. When Brian's in the middle of the big drug sale, Lundgren manipulates him into sparking the shoot-out. Lundgren shoots Brian with an aim to steal the money himself once everybody's dead.

If you're wondering what the lawyer has to do with any of this, you're not the only one. How and/or why the Sheriff and Danny Trejo show up at the lawyer's house is equally confusing. And at no point does Brian tell the broad where he stashed the cash--she just knows to go to the bus station. As does Dolf Lundgren.

4got10 wants to be this great twisted caper, with all these different characters and threads weaving an intricate web of deceit. But writing something like that requires time and patience, if not talent. 4got10's writer came up with the basic idea but stopped short of planning it out. So what should have been something along the lines of Lock Stock meets Get Shorty meets Once Upon a Time in Mexico, feels more like bad True Romance fan fic.

Normally a cameo is a good thing. Or at least a surprising thing. 4got10 has three "big" "cameo" performances. In addition to Dolf Lundgren and Danny Trejo, Vivica Fox is in this movie, and only one of them has anything to contribute to the plot, such as it is. While Danny Trejo's drug lord character has a reason to be in the movie, Vivica Fox's DEA chief doesn't. Excise her from the script and you've freed up ten minutes that could be put to better use. That's not to suggest that Vivica Fox isn't good at her job, she just has nothing to do.

Most troubling of all is Dolf Lundgren. Clearly, he was only available for a couple of days but his character is more important to the plot and he should have more of a presence in the movie. If the script were better, it's likely Lundgren's DEA agent would do more, make more of an impact, but then he might not have been able to accept the role because he'd have to have been on set longer than a couple of days.

Here. I've pointed it out.

Now, take a look at this next photo and see if you can see it.

You can't because it's not there. Instead of a white panel van, there's a dark minivan parked in its place.

Note here the "braud"'s tattoo changes from one moment to the next.

And see how Danny Trejo is right-handed while his stand-in is a leftie.

Normally I wouldn't hold a movie's budget against it. Unless we're talking about a billion dollar movie that looks like crap. Then yeah, it's a problem. But with low budget films, looking cheap isn't necessarily a strike against.

4got10 is low budget, and it looks pretty good, so that's a real accomplishment. But all that goodwill is undone by this one embarrassing prop: 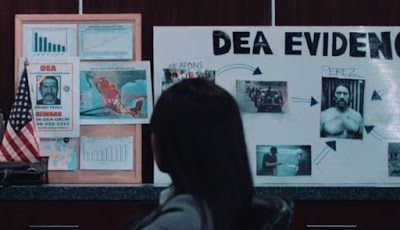 How can a movie that can afford custom search engines and email graphics produce something so cheap as the evidence board seen here? There is no acceptable reason, no good excuse as to why this thing exists.

Like all the other terrible mistakes that found their way into this film, this awful bit of set dressing sums up all that's wrong with 4got10. It showcases a certain laziness on the part of the filmmakers, a lack of attention to detail and an inability to prioritize that completely undermines their efforts.
Posted by DM at 23:10

Congratulations - you've found a movie that would actually benefit from the it-was-all-a-dream ending.


Thank you for the good writeup. It in fact was a amusement account it. Look advanced to far added agreeable from you! By the way, how can we communicate? yahoo sign in

Hi. This post was extremely inspiring, especially since then. The eligibility criteria for Turkey transit visa for US citizens are the same as for other visa types. If you want a visa to enter Turkey for tourism or any purpose, you can apply for a visa transit Turkey.

Thank you The foreign visitors need to apply for visa to Kenya online. That offers them fast and secure visa services. You also can check the al information regarding to visa here to get in the Kenya and pay online kenya evisa cost.

Thankyou for this important information. Thank you . Your articles are very informative . Keep writing. The Government of Ukraine grants the e-visa online. And now you can easily know about the facts related to the Ukraine visa fees. The Ukraine visa fee is dependent on your nationality and type of e-visa which one you choose.

Very nice and useful post, I recently found. Now there is no need to visit the embassy for an Indian tourist visa, you can apply for a visa online.


This is a very useful article… India etv visa fee depends on your visa type and your nationality.