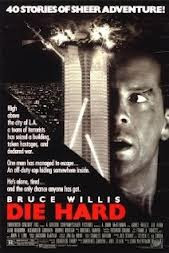 It blew my mind when I learned this movie is based on a book. "That must be one kick-ass book," I thought to myself. I've yet to read it. I likely never will.

A lot of people have written a lot of words about Die Hard, and I'm going to contribute a few more to the archive. In short, Die Hard is an action movie set on Christmas Eve. John McClane arrives in Los Angeles to spend the holidays with his wife and kids, but he must first navigate the treacherous waters of their reunion at her office Christmas party. The McClane's separation is largely John's fault, when he stubbornly refused to move cross country after Holly got a promotion. The loving reunion is interrupted first by John's combative and antagonistic attitude and then by "terrorists" who crash the party. Led by Hans Gruber, the villains plan to rob the Nakatomi Corporation of the bearer bonds it has locked up in the vault. As luck would have it, John is in the bathroom at the time of the terrorists' arrival. Loose in the building, John dispatches villains one- or two at a time, frustrating Hans and giving hope to the hostages. Meanwhile, outside and down below, the police and the FBI scramble to gain control of the situation. Only Al, the first cop on the scene, has any sense of what's happening inside the building, but his ability to provide any assistance to John is limited by his position, both outside the building and as a low-ranking police officer.

What is it about Die Hard that makes it so good? Is it the juxtaposition of John and Al, one on the inside the other outside, reflecting the film's privileged knowledge and layered plot? Is it the use of space, the building's geography, creating a microcosm for John and Hans in which they maneuver against each other? Or is it simply the fact that John's barefoot the whole time? Or is it the Twinkie product placement?

It's all of these things, small touches and broad strokes. On the surface, Die Hard is a standard action flick: a lone hero who must overcome overwhelming odds in order to save the day. Mildly subversive, the film casts the police as Johnny-come-lately, ineffectual authorities who make a big show of force but can't do much against Hans and his rocket launchers. And then along comes the FBI, a couple of agents with the same last name, who show up with their big egos and SOPs. They too are woefully outclassed but, in a textbook case of dramatic irony, they don't know it.

Indeed, John catches some lucky breaks, but he's also resourceful without being a conspicuous genius. And sure, he's quippy, but his one-liners are for him alone and lack the self-conscious delivery that often accompanies the action movie pun. John's talkative nature is also a kind of display behaviour. Action movies are all about bodies--male bodies--display; the films use masculinity as a currency. Because John McClane is not a beefy guy like his contemporary action heroes, this shortcoming is made up for by his smarts and his fast mouth. That's not to say Bruce Willis isn't fit or any less manly, he's simply a different kind of action star, one that trades on physical prowess as well as intelligence.

Similarly, Hans isn't a typical bad guy. He's smart, probably smarter than John. Like the man says, he benefits from a classical education and "could talk about industrialization and men's fashion all day" but he is also a violent criminal. Hans' sophistication is matched by his clarity of vision. Despite John's machinations, Hans will not alter his plan and he instructs his men to do the same. Hans is also relatively unknown, and remains so for most of the film because the movie is less about him and more about what he does. Hans' display behaviour is almost entirely rooted his role as mastermind. He never engages in a physical fight, shoots people when they're no longer useful to him, and manages to fool John into believing he's a hapless victim when they first meet. Hans' character brings a certain amount of class to what is generally viewed as a classless genre. 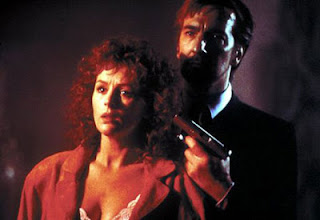 The script withholds very little from the audience. Characters are no more or less well informed than they should be depending on their situation, but the audience knows the score. The appeal here to watch the drama play out. Die Hard is more organic than a lot of other action films, with few contrivances and little to no expository dialogue. The film keeps track of its characters through careful attention attention to blocking and placement, and in a film where villains vastly outnumber heroes, this kind of detail is essential in order to guarantee the audience's continued suspension of disbelief and their emotional and intellectual investment in the story.

Die Hard blends action set-pieces with drama and intrigue. Gun fights and explosions are balanced out by twisting plot lines and lives in peril. The film even manages to successfully move the drama off-site, occasionally cutting away to Richard Thornburg, a sleazy reporter who exploits John's family for his benefit. Thonrburg's tactics create problems for Holly, bringing her and her relationship with John to Hans' attention--something that had been successfully kept under wraps for most of the film. Thornburg, of course, doesn't know or care about how his actions might affect the outcome of the situation at Nakatomi Plaza, but it's a despairing moment for the audience. John has no idea.

The film's textured plot is matched by the richness of the location. Great attention to detail was paid to set design, from matte paintings to wallpaper, to give the film the look and feel of a real place. We only visit a handful of floors of the Nakatomi skyscraper, but each has its own qualities which distinguish it from the floors above and below. The film doesn't simply cut from one part of the building to another, but moves through the space, as a person would. Getting a handle on the building's layout helps both John and the audience move about the space more easily. The nudie calendar, for instance, tells us that we're in the maintenance area by the elevators. The payoff for this painstaking geography lesson is John's ability to evade Hans' men. 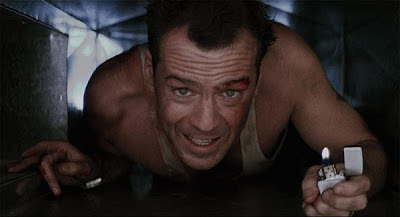 The other, bigger payoff is to see it all destroyed. After so much careful and deliberate filmmaking and storytelling, the whole thing goes up in smoke--Nakatomi is blown up in what still is one of the most impressive special effects in action cinema. The explosion is real, but the building is not. It's a model, built and shot to look exactly like Nakatomi Plaza, and it works perfectly. Following that is one of longest falls (on descender) in movie history, preceded by Alan Rickman's very real look of surprise as he drops out a window.

To say that Die Hard is an accomplished action movie is an understatement. The movie exhibits a quality of filmmaking rarely experienced in modern action cinema. No one part of the action package is undermined or favoured over another: the cinematography compliments the action and the story is intriguing without being overly complicated. Fights are not set-pieces, the stakes are high but not outrageous, and the script has closure.

That's not to suggest the film is perfect. Die Hard has problems, like the missing ambulance and Karl's return from the dead. But these minor scripting errors and contrivances don't detract from the movie's impact as a whole. In fact, Karl's resurrection provides closure for Al and ensures a happy ending for all.

My friend Meaghan insists Die Hard isn't a Christmas movie, even though I and many others make a point of watching it every year at Christmastime. To her I have this to say: The film shares a lot of the same qualities of other Christmas movies. To begin with, it's set on Christmas Eve at a Christmas party. It involves a great deal of pain and anguish, it features Christmas music (Run-D.M.C.'s Christmas in Hollis) and it ends with a family reunion. It even snows (paper). Die Hard is a perfect alternative to the schmaltzy Xmas movies that crowd the television and theatres in December. Not only is it a fantastic action movie for the reasons listed above, but it provides viewers with the emotional release they often need at what is, for a lot of people, the most difficult time of year.

Of course its a Christmas movie - evil loses, good wins, and the good guys are redeemed AND there is snow.

That's what I'm talking about!

Haha. I love how this one is always brought about around Christmas. All valid points. It is a good all around movie and especially this time of year.