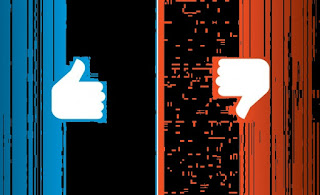 It's that time of year again, when I make excuses for not seeing a lot of new movies in theatres. Except this year I did see a bunch of movies in theatres, specifically Alamo Drafthouse South Lamar (Fantastic Fest) and The Bloor Hot Docs Cinema (Toronto After Dark). So here it is, the best and worst films I watched either at home, at someone else's house, on a plane, or in theatres.

Hot: The Avengers
Yeah, it's a Joss Whedon superhero movie.
Fugly: Prometheus
In truth, I liked Prometheus. It looked fantastic, was fun to watch, and generated a lot of talk around the dinner table. But the film is so flawed in so many ways that I have to rank it among this year's worst.

Wish I'd seen it sooner: Angel Heart
A detective story set largely in New Orleans in which one man's search for a missing person becomes a personal journey of self discovery. Also, there's voodoo.
Wish I'd seen it never: Playback
Christian Slater skulks around in the background of a movie about a dead guy who can magically possess people through a video camera. I think. I don't remember much about it, which is a blessing really. 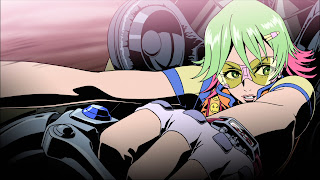 So amazing: I Saw the Devil
Korean thriller about a cop pursuing a serial killer. As good, if not better than Silence of the Lambs, which is the benchmark for cop/serial killer movies.
So disappointing: Skew
Found footage movie about three people driving across the States. One of them thinks he can kill people with his camera. The others do nothing about it.

For real!: The Conspiracy
Brilliant mockumentary about two guys investigating a conspiracy theory who get in way over their heads. Forces the audience to question the very legitimacy of the film itself.
Seriously?: AvH: Alien vs Hunter
Possibly the worst The Asylum film yet.

Nerdtastic: Lloyd the Conqueror
Thrill to see Mike "Bubbles" Smith as an evil genius who conspires to rule the Calgary larping community.
Spare me: V/H/S
Indeed, some of the segments in this found footage anthology are pretty good. But the framing story is so bad that it lowers the tone of the entire film and predisposes the viewer to dismiss everything else as worthless crap. 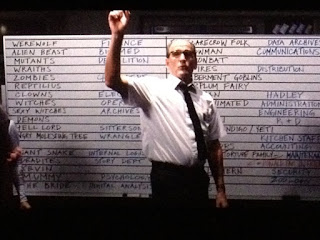 I got fifty bucks on Reptilius. (The Cabin in the Woods)

Surprisingly good: Dredd
I've never before used "beautiful" to describe an action movie, but Dedd is, in parts, quite beautiful. Rare is the director who understands the proper use and limitations of 3D.
Worse than imagined: If a Tree Falls
If you need to close your movie with a lecture on social theory in order to explain the point of your film, then you might want to consider giving up filmmaking altogether.

Winner winner: I Declare War
Kids engage in an afternoon game of war. It won the Audience Award for Best Film at Fantastic Fest. 'Nuff said.
Big chicken dinner: Bigfoot: The Lost Coast Tapes
I tried to explain this movie to my friend. "That sounds like the dumbest thing ever," he said. 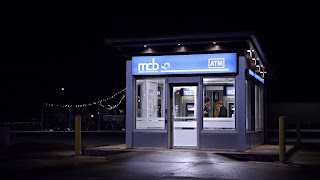 Next gen: Antiviral
Cronenberg's kid shows off his skill and weirdness.
Should be sterilized: Nightmare Alley
I feel like kind of a jerk bashing a no-budget indie flick but this one is just so terrible it needs a public service  announcement warning viewers to keep away.

Hidden gem: Bedeviled
A slow-burning thriller about one woman's awful suffering. When she's finally had enough, the film switches grears and becomes an brutal tale of vengeance and retribution.
Conspicuously terrible: ATM
Three people are menaced in an ATM vestibule by a hooded figure who spends a lot of time in back of the building, which would make escape super easy if the captives--and the script--weren't so fucking stupid.

Pictured: style. Not pictured: substance. (Beyond the Black Rainbow)

OMG: The Cabin in the Woods
Joss Wedon strikes again with his meta horror about kids and cabins and the horrors that befall kids in cabins.
WTF: Beyond the Black Rainbow
If someone can explain to me what's going on here without using the words "experiment," "retro," or "dissociative disorder" then I'll gladly re-evaluate my position.


Honourable mention: Battleship
Battleship is the beloved "board" game somehow brought to life as an action spectacular. The film is way better than it has any right to be, and although it aggressively pushes a pro-armed forces agenda, it's so damned fun to watch you don't even care.
Posted by DM at 15:08

as a masochist I might just watch Beyond the Black Rainbow to see if I can meet your challenge!

Let me know how that goes :P

Agreed - The Avengers was the best movie I saw this year at theaters. It was the only one but it still would have been the best.

Angel heart - I dunno, I saw it years ago & wasn't impressed, maybe I figured it out too soon or there wasn't enough nudity.

Reptilicus! That was my special treat for myself - I watched the original Danish version for Thanksgiving, much, much better than the US release. Okay, maybe just much better. Maybe even just better but I won't go any lower. Gotta see the flying scenes to appreciate it.

Nightmare Alley totally is great! Not the version you saw but the original version, 1947 with Tyrone Power - I recommend it highly.

The Cabin in the Woods - yeah! Wedon is amazing.

Movie I watched and wish I had not had - Hostel. I will NOT be watching the sequels. I can handle gore but this was just distasteful.

I enjoyed The orphan no matter what anyone says about it.

Not playing Bojio on your mobile? Download The Most Amazing Version (Available for iOS and Android)

Not playing Bojio on your mobile? Download It Now (Available for Android & iOS)