Other Dangers: Scary Stories to Disturb Your Kids

Not too long ago, I exposed a shocking case of children's cannibalism.  Today I present to you not one, but three cases of no-way-is-this-suitable-for-kids children's lit.

One of my favourite books growing up was Scary Stories to Tell in the Dark.  The book, published in 1981, is a collection of urban legends and folktales.  That in itself might seem pretty tame, but the pictures that went along with the stories... 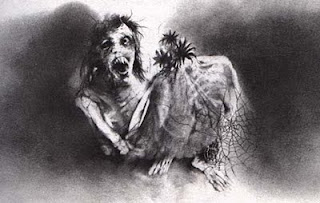 There are no gods here.
Stephen Gammell provided the illustrations for Alvin Schwartz's stories.  Stories with titles like "Old Woman All Skin and Bone", "The Dead Man's Brains", and "The Ghost with the Bloody Fingers".  The collection features tales you've probably never heard before as well as some classics such as "The Hook" and "The Babysitter".  Admittedly, not all are scary.  "The Viper" is a well-told joke, and "Wait Till Martin Comes" features a child-hero who knows better than to stick around for the titular character. 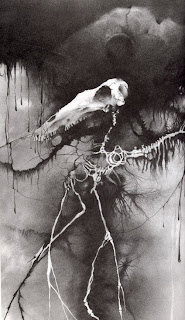 Gammell is a self-taught, award-winning artist who specializes in illustrating children's lit.  Despite the disturbing nature of his art, there's no question his drawings exhibit a rare talent.  I said Scary Stories was one of my favourite books, due in no small part to their art.  The pictures are downright terrifying, and I first gazed upon them when I was just a little girl.

Explains a lot, I guess.

Scary Stories is the first of three books in a series of youth horror lit written by Schwartz, all illustrated by Gammell.  The pictures, in combination with the books' more violent stories, led to angry challenges launched at the American Library Association.  In fact, so many people contested the books that the series was the number one most-challenged "book" of the 90s. 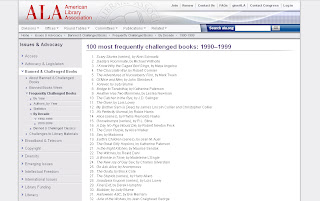 Beware the subversive prose of Judy Blume.
My parents obviously didn't have any problems with Scary Stories, and I've held on to my copies in the hopes of one day passing them down to a new generation of horror lovers.  I might wait till my imaginary beneficiary is a bit older than I was when I first cracked those covers.  Seven might be a bit young. 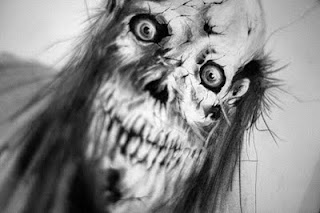 You're never too young to have your innocence devoured.
Posted by DM at 12:06

I had all of those books and loved them. But sometimes the stories got the best of me and I got a little too creeped out. The first 2 are on google books. Even at about 10 years old I thought it was odd that there were such disturbing pictures. But really what child shouldn't be reading about Harold the scarecrow holding a skinned corpse? Ah, childhood memories.

Harold always got to me, as well as the man who killed his wife, and then was chased by a pig with her voice and high heels on. There was also a bloated woman with stringy black hair, and dark pitted eyes. No child will forget these books, due the illustrations, if nothing else. Although I usually slept with the lights on, they were always some of my favorites.