You Are What You Watch

Not too long ago I had kind of a bad day, and when I got home all I wanted to do was watch an action movie. Something with violence and explosions.  Whether we're conscious of it or not, our emotions influence our movie choices.  It only seems natural that I'd crave catharsis when I'm feeling angry and powerless; the effect of watching an action movie will rid me of my negative emotions and help me attain homeostatis. 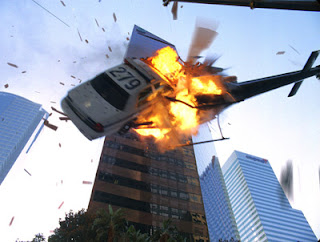 Die Hard 4 is my preferred choice when I'm mad at helicopters.

But is it possible to link all genre preferences to different moods?  Back when it was possible to survey video store customers, researchers in Connecticut did just that--in 2004 they questioned store patrons on their moods and movie selections.  The researchers had three main hypotheses regarding mood and movie selection, all of which were drawn from a body of theory called mood management.  According to mood management theory, people will want to maintain or increase good moods, and minimize bad ones.  Audiences, therefore, will make choices to regulate their level of arousal in an effort reach or maintain optimal arousal.

Researchers hypothesized that store customers who were in a heightened state of arousal (not sexual) would choose comedies, which are thought to be soothing.  Conversely, bored patrons would be more likely to choose action, drama, or horror movies to get them worked up.  Researchers believed that people who were feeling clam or energetic would also choose comedies and maybe action movies, but would shy away from tense, suspenseful, or serious movies.  And finally, people who were in a bad mood would again choose comedy to alleviate their negative feelings. 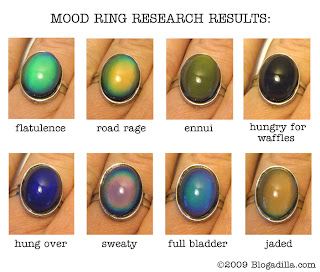 Researchers were unable to guess what gassy customers would rent, but they were likely to watch it alone.

After surveying 242 video store patrons, researchers found they were right about some predictions and very wrong about others.  Notably, people who rated themselves as feeling nervous chose horror movies as opposed to something more soothing or uplifting.  For nervous people, their feelings of anxiety intensify the gratification felt at the end of the movie when the villain is defeated.  Comedies can't offer that same release. Furthermore, customers who had no plans for later in the day (after the movie) were more likely to walk out with a horror movie than any other genre.

Also surprising to researchers was the fact that people in bad moods didn't choose happy movies.  Instead, they tented to select crime movies.  The reasoning is that bad moods and negative emotions don't always need to be avoided or mitigated.  My own bad mood resulted in a preference for action, a subconscious need to revel in an intense emotional state.

Of course, mood isn't the only predictor for movie genre selection.  Stable personality traits play a role in determining what people are likely to want to watch and influence genre preferences.  But these things are harder to assess during a two-minute interview outside a video store.  Speaking in general terms, the results of this research show that it is possible to determine movie genre selection based on the viewer's mood, and that horror and similar-type movies are important for mood management, offering people chance to deal with their negative emotions.

another great topic. never really thought about my mood in regards to what I watch. I also tend to mostly watch a lot of action films. maybe I'm just bored all the time. I'm only angry if it's a bad one....like Michael Bay bad.

I used to get into a romantic comedy or dramedy rut when I was depressed (Bridget Jones, High Fidelity, Legally Blonde). When Harry Met Sally is my 'I'm in a good mood and want to stay there' movie.

Return of the King is a winner if you ever need a good cry.