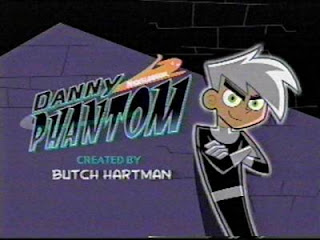 I know what you're thinking: What the hell am I doing watching a crummy kids' show? The answer may surprise you: It's a hell of a lot better than the other crap on TV.

I'm not kidding.  And I watch a lot of crap.

As the I'm-a-little-embarrassed-to-be-listening-to-this theme song explains, Danny Fenton's parents built a portal to the ghost zone that accidentally mutated Danny's DNA so that he can turn into a ghost at will.  In his ghost state, Danny can fly, turn invisible, turn intangible, and shoot ghost lasers from his ghost hands.  As the series progresses, he also learns to create a shield and use a ghostly wail to weaken his opponents.  Being a super-powered ghost has its disadvantages, however, as Danny must balance crime fighting with attending school and managing his social life.  He is just 14, after all.

The show has all the moralizing you would expect from a Saturday morning cartoon; it waxes philosophical on responsibility, ethics, friendship, and good and evil.  Each week Danny learns a valuable lesson about being a good person, but the show stops short of preaching to its audience.  Rather, the cartoon contextualizes Danny's dual nature--his duality represents the challenges and temptations of right and wrong.

And here we come to the show's true genius: Danny's split personality is not a simple representation of an internal struggle of good vs evil.  Although most of the ghosts in the show are villains, Danny faces off against human antagonists as well as another human/ghost hybrid.  Things are further complicated when Danny crushes on one of his enemies (episode title), and when the students at Casper High fall sick with ghostly ailments ("Doctor's Disorders").  Moreover, a constant reminder of Danny's status in the "real" world is the weekly bullying he endures at the hands of Dash, the school's star jerk athlete. 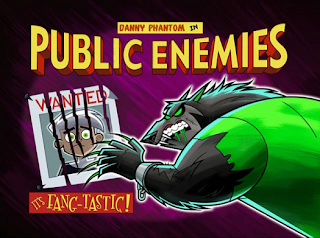 You gotta love the title cards. That wolf only speaks Esperanto, by the way.
Danny's main nemesis is Vlad Masters, a hybrid like himself, who's ghostly alter-ego is Plasmius.  As a man, Vlad poses a threat to Danny's home life--he's in love with Danny's mother.  As a ghost, Plasmius is exponentially more powerful than Danny.  Danny's victories over Vlad/Plasmius are not due to his enemy's bumbling (though that does happen on occasion), but are the result of Danny's own ability to balance his humanity with his ghostliness--something Vlad is unable to do.  Whereas Vlad is motivated by power, using his ghost powers to help him aggrandize in the real world, Danny is only motivated to stop Vlad.  Danny's defensive plays are backed up by his friends, Tucker and Sam, and his sister, Jaz.  Vlad, on the other hand, has no friends and his offensive actions only serve to further separate him from everyone else.

Other villains who make regular appearances are Skulker, a "great white hunter", Technus, a ghost that possesses electronic equipment, and the Box Ghost, who's totally lame.  These and other villains (with the exception of the Box Ghost) challenge Danny on a weekly basis, forcing him to use his cunning as much as his super powers.  Although Danny is sometimes quick to dismiss his enemies, he learns to respect them--not for who they are--but for what they represent: Desiree grants wishes, teaching us to be careful about the things we say to one another; Johnny 13 has a living shadow, forcing us to understand that people can and will surprise you for better or worse; and Walker strictly enforces the rules in the Ghost Zone, teaching us to both respect the law and, in a subversive twist, to question authority when it's called for. 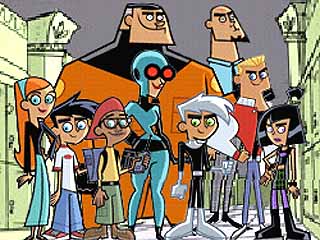 Danny's teacher, Mr. Lancer is voiced by Ron Perlman.  Another reason to watch.
A variety of themes are explored over the show's three seasons, including jealousy, vengeance, and selfishness.  In "Control Freaks", a human who has no ghostly powers himself is able to bewitch ghosts and have them do his bidding.  In "Shades of Gray", Danny's classmate Valerie becomes a ghost hunter with her sights set on Danny Phantom, and in the long-format "The Ultimate Enemy", Danny forsakes his ghost powers altogether, believing them to be too much of a burden--a decision with terrible consequences.

Created primarily for a young male audience, Danny Phantom, unlike girl-only cartoons, is accessible to both genders.  Helped along by a good dose of melodrama and some well-drawn female characters, the show has girl appeal while maintaining its male-lead action-adventure roots.

Danny Phantom's first two seasons are typical of an episodic cartoon; each episode is largely self-contained.  Although some story development does take place--notably Jaz' accidental discovery of Danny's secret--little changes in the lives of Danny and his best friends Tucker and Sam.  In the show's third and final season, the format switches to something a bit more serialized.  Vlad manages to get himself elected mayor of Amity Park, almost assuming narrative control of the entire show.  This wouldn't be so much of a problem if his character was still the scheming, creepy jerk he always was, but Vlad/Plasmius is re-written as more of a buffoon than in previous seasons, which lessens his impact as a villain.  And because he's now in a position to really meddle in Danny's life, his lack of competence undermines his villainy.  This character assassination is a real shame for fans because the Vlad/Plasmius-Danny's parents dynamic presented some of the more challenging and adult stories; Vlad's constant attempts at sabotaging Jack and Maddie's (Danny's parents) relationship commented on the bonds of family and friendship, while Maddie's own sometimes complicated feelings toward her husband called love and marriage into question. 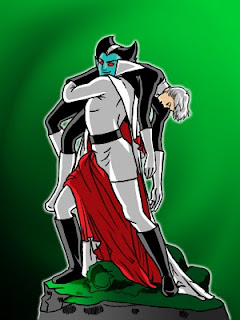 This never happens, but thanks to the fans on deviantart, I can pretend like it did.
Thankfully, the show's third season is short, but as a kind of final insult to fans, the series finale is almost just as bad as Vlad/Plasmius' bumbling.  Loose ends are tied up, of course, and a long-standing romantic, melodramatic story arc is ended, but the show has, by this point, burnt out and is merely a ghost of its former self.

If you can't help but like cartoons, Danny Phantom is worth watching.  But do yourself a favour and give the third season a miss, except for "Urban Jungle", because it's got Mark Hamill.
Posted by DM at 18:25