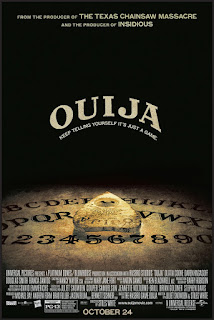 After Debbie hangs herself for no apparent reason, her best friend Lane starts looking into her death and concludes that Debbie's "suicide" is directly related to an old Ouija board. Lane and her friends use the board to find answers and/or closure, but it doesn't work. Instead of closure, the board presents them with new mysteries which they must solve before they each befall a fate similar to Deb.

I lied when I said this movie didn't have any problems. Ouija's got problems, specifically problems with pacing and escalation. But disregarding those for the moment, Ouija's biggest issue is that it's flat. Flat tone, flat story; there's nothing there you can dig your teeth into, no real substance. It's just...flat.

There's no real mystery to Ouija. The film plays out exactly as you would expect it to, including the fake-outs. Have you seen a haunted house movie? A movie about ghosts? Then you've seen Ouija. I'm not saying each new movie must break new ground, but Ouija is so rote that it's dull. I wouldn't go so far as to call it boring, but the movie holds no surprises. One or two creepy moments can't make up for ninety minutes of same 'ole same 'ole.

Maybe it's me. Maybe I'm the problem. I've seen so many horror movies that I can't just enjoy a regular ghost story. Or maybe it's the regular part that's the problem. There's no real art or artistry to most mainstream horror--it's a product not a project. Ouija's script wasn't written so much as it was outlined and scheduled. 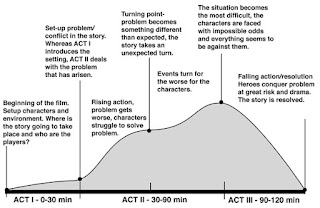 And it's that lack of real passion for telling a compelling story that leaves the movie feeling flat. It's laziness, really. Too lazy to build a video diary into Debbie's backstory, Lane discovers the one (and only) personal video Deb recorded that just happened to contain important information. It's the visual equivalent of the exposition dump. Too lazy to craft any real tension or suspense, the script uses the ghosts as tools rather than characters. And finally, too lazy to escalate the stakes, the movie separates Lane from her friends, stalling the plot rather than developing it.

It's this kind of filmmaking that makes me weep for the next generation. If tomorrow's horror writers and directors are watching Ouija thinking it's acceptable, what uninspired plots will they conceive when it's their turn at the wheel?

Email ThisBlogThis!Share to TwitterShare to FacebookShare to Pinterest
Labels: board games, boredom, Ouija board

I think the problem is that this same story has been told tens of thousands of times as an urban legend and filmed more times than it ever deserved to be.