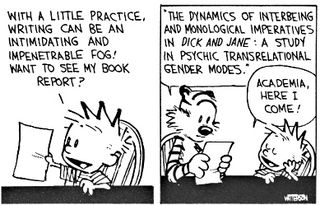 For fun I like to read academic articles about horror movies. But what if the movies themselves were papers published in peer-reviewed periodicals?

Identifying and Coping with Cyclical Bodily Mutation and its Consequences

The Effects of Extreme Isolation on the Family Unit: A Case Study

Using Stress as a Motivator for Personal Growth: A Cost-Benefit Analysis

"If it Bleeds": Assumption and Fact in Combat Situations Against an Unknown Opponent

Environmental Manipulation and its Effects on Group Dynamics: A Failure Analysis

Power Tools: Innovations in the Use of Forestry Technologies and Sustained Patriarchal Hierarchies in the American Southwest*
Posted by DM at 19:28