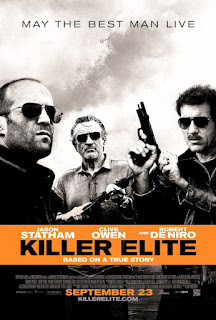 Killer Elite is a good movie, dressed up as a great movie.  It's got all the the cast, action, and conspiracy of a taught thriller--it's even "based on a true story"--but Killer Elite stops short of being truly remarkable.  Not nearly as complicated or bloated as other reviewers make out, the movie, I think, is actually under-developed.


I hesitate to label the film "amateur" but it kind of has that feel.  Take for instance a scene in which the committee members of the secret society sit around their meeting table and discuss with one another the nature of their business.  That is exposition at its worst.  Or Jason Statham's girlfriend, who is of little consequence but in constant danger of getting killed.  A excellent example of unnecessary conflict and plot.

In short, the film is this:  Sheikh Amr's sons were killed by SAS soldiers during the Oman conflict, and now the Sheikh wants vengeance.  He hired Robert DeNiro to kill the soldiers responsible, but DeNiro failed.  So now he's hiring Jason Statham, DeNiro's buddy, to complete the job.  DeNiro's life hangs in the balance.  Statham sets about tracking down and killing the SAS soldiers, but his actions bring him and his crew to the attention of Clive Owen and a shady group of corrupt and conspiratorial businessmen who call themselves the Feathermen, and are all ex-SAS.  Vengeful in his own right, Clive Owen goes after Statham.

There is, of course, more to this story.  The following plot points are scattered throughout:
Although it would seem the movie suffers from an over-abundance of plot, that's not really the case (with the exception of the clumsy handling of the girlfriend-in-danger).  The problem is the film doesn't know how to develop and distribute the plot across its running time.  Now, there is nothing wrong with the action-plot-action format of most action movies, but Killer Elite is not most action movies; it's an action-thriller, or at least it really wants to be.  And action-thrillers--good ones, at any rate--balance action with intrigue.  Killer Elite doesn't lack for intrigue, it's just not handled properly.

If the film were stripped of most of its plot, it would play much better.  The action is first-rate, but much of the story feels largely unnecessary because it's so under-written.  Moreover, the film lingers on needless details and characters, forsaking valuable screen- and story time what would otherwise be used to further develop the conspiracy that lies at the heart of the movie.

Clive Owen's terrible moustache notwithstanding, Killer Elite certainly looks good, and is enjoyable up to a point.  But as soon as it starts in with the more "complicated" notions of government-sponsored assassination  and clandestine organizations, it gets lost in its own web of intrigue.
Posted by DM at 22:47

Enjoyed this too. Clive's stache' was funny though and the fight between him and Statham was entertaining.

I seem to be brain farting all over the web today....sorry. I was going to say Statham has a knack for being in films with worthless girlfriends. Expendables was an even worse example of a gal having no purpose whatsoever.

Markus, Statham's girlfriend in The Expendables did serve a purpose: she gave him an excuse to hit someone. He hardly needs one though. His very purpose is to hit people.

Now why didn't I think of that? But then again, he doesn't need to have a girlfriend in any of his films to have an excuse to hit someone. They could have easily had him just do some sort of cock fighting bar scene for that.