Double Feature: The Same but Different

I'm told beer and cheese pair well.  I've never tried it, preferring wine to beer.  But I trust the LCBO* to know what they're talking about.  Just as you should trust me to know which movies compliment each other in a delightful combination of cinematic flavours.

Wolfgang Peterson's 1995 thriller follows the fictional Motaba virus, an ebola-like sickness, as it threatens to overwhelm the continental US.  Working around the clock to stop Motaba are the US military and the CDC, but their efforts to cure the sick are being hampered by a high-ranking official.  Contagion picks up where Outbreak leaves off, with an infected planet.  In the States, the CDC is working hard to develop a vaccine for the highly contagious and lethal flu that has spread all over the world.  While the government is doing what it can to help people, others are looking to profit from the epidemic.

While Outbreak is more focused on good guys vs bad, Contagion is more nebulous.  Indeed the latter does have a villain, of sorts, but the film is more nuanced in its morality than Outbreak.  Both offer a look inside the workings of government, civilian, and military establishments and how they react to and deal with sickness on a epidemic scale.  Each are frustrating, hopeful, thrilling, and scary as they track the spread of viral disease and medical response.

Largely overshadowed by Mission to Mars, Red Planet didn't get much attention.  By no means perfect, this Mars movie at least took place on Mars.  After crash landing on Mars, a group of scientists have to trek across the planet's surface to find the ship that will get them off-planet.  They make a few interesting discoveries along the way, but these are of lesser importance than their survival.  Similarly undervalued is the first Riddick movie, Pitch Black.  In it, Riddick is just one of a handful of crash survivors, albeit he is a vicious killer who's escaped custody.  Shipwrecked on a distant planet, the group is in a race against time to save themselves, not from Riddick, but from carnivorous beasts that live underground.

Relatively understated, both films deal with survival in a hostile environment.  Although sci-fi, neither film is bloated with future-y effects or a space opera plot.  Pitch Black is, arguably, the better of the two, but there's something to be said for Red Planet's in that it doesn't pretend to be more than it is.  Also, it's got a robot dog. 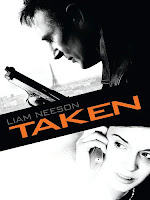 Liam Neeson kicks ass all over Paris to rescue his daughter from white slavers.  Face paced, violent, and unapologetic, Taken is a hallmark of no-bullshit action.  Australian film The Horseman sees Christian on a similar quest, as he methodically hunts down the men responsible for his daughter's death.  Surprisingly violent and brutal, the film does soften up enough for Christian to forge a delicate bond with Alice, another victim of the same organization that "murdered" his daughter.

These two movies are perhaps the closest match of all the pairings here listed.  Both deal with fathers questing after their daughters, both feature excellent violence, and both are elegant in their simplicity.  Taken is more uplifting than The Horseman, which is completely unrelenting in its bleakness, but The Horseman is about a regular guy doing (for him) irregular things whereas Liam Neeson's character was trained to take down everyone who stands between him and his daughter.

*Liquor Control Board of Ontario. The sale of alcohol is strictly regulated in the province of Ontario, so much so that you have to buy booze from government-run stores.  Wine and liquor are purchased at the LCBO.  Beer is bought, no kidding, at The Beer Store.
Posted by DM at 21:19

Good to see some love for Red Planet and Pitch Black! After the mess of Chronicles of Riddick lets hope there's a return to basics for the third Riddick outing - but I fear the worst...

Beer and Cheese does absolutely rule. while I haven't seen "The Horseman" yet, its plot seems to echo "Edge Of Darkness" with Mel Gibson in a way. Both films have a guy getting to the bottom of his daughter's death.

Elwood, you could have a crew of hundreds and still produce a crappy looking film :P

BP, I used to work in a video store and recommend Red Planet all the time. I'm looking forward to the next Riddick movie, though it'll probably be even more space opera-y than the last.

Markus, I wanted to see Edge of Darkness and then just forgot all about it!

Right after I posed this, I thought of another double-feature. If you know of a few good pairings, do tell!