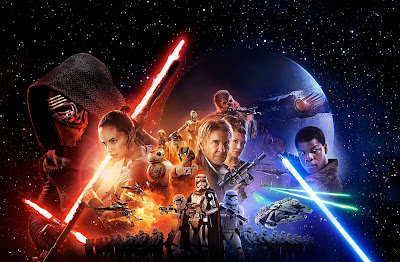 I take no small measure of joy in knowing I saw this movie before any of my friends. For whatever reason, a movie theatre two hours away from where I live had a 22:15 showing on Thursday, 17 December. Everyone else back home had to wait till midnight. Suckers.

I did my best to go in clean. Sure, I saw that teaser back in 2014, and paged through the Vanity Fair editorial. But that was it. And one trailer. I avoided reviews, although I had a couple of headlines repeated to me, including the one in the New York Times: "It Didn't Suck." My mom told me; she knew I would appreciate it. Other than that, I was totally free and clear from any outside influence.

Like so many of my generation, I grew up loving Star Wars, and spent a good decade of adult life absolutely hating part of it. It was a weird to hear about JJ Abrams' involvement, weirder still that Disney was in charge, but a huge relief to learn this episode was going old-school with proper sets, real locations, and practical effects. I have zero stock in Star Trek and so was able not only to appreciate what Abrams did with that franchise, but to enjoy it (the first one, at any rate). Perhaps he could do the same for Star Wars. Yes, I was pissed about the whole expanded universe thing--I invested long years of my life in reading book after book of EU adventures--but what're you gonna do? Not see the movie out of spite? Yeah right.

There is no way for me to boil down The Force Awakens to a single witty, pithy capsule comment. No way for me to lead in with some captivating click bait about how much I did or didn't like the movie, or what I thought about how well it did or didn't honour its legacy (never mind that someone already beat me to it). I have too much invested in this movie, this franchise--this galaxy. And that's a problem. A problem for me, as a critic, and a problem for you as a reader.

See, I'm biased. Completely and absolutely biased. I can't be impartial. My love for Star Wars makes too forgiving or, put another way, too critical. I could try to intellectualize my opinions about The Force Awakens, but what would be the point in that? The review would read so cold, unfeeling. Rather, I present a Star Wars review written by the worse kind of Star Wars nerd, the sort of girl who has a hard time seeing past her own personal feelings and who also holds herself, not only as a nerd but as a film critic and analyst, in high regard.

I wanted exactly two things from The Force Awakens, for it to be its own movie and to not suck. While they seem like simple things to ask for from any movie, they need some clarification here. Beginning with the latter, by not sucking, I mean I didn't want a repeat of the prequels--big, overblown movies that are too enamoured with themselves to provide any real entertainment value. It is impossible to speak about The Force Awakens without reference to what came before, and the prequels provide the perfect point of comparison on the subject of suckitude (a measure of how much something sucks).

For a nerd like me, the prequels are unwatchable. The story is too big, too convoluted, and too long, and the movies rely too heavily on CGI for their effects. The result is a poorly-conceived political plot that is hard to follow, both narratively and visually. George Lucas' motto while making the prequels seems to have been, why build it when we can render it instead? And since no one had the guts to ask the opposite, the very real, practical effects that helped make New Hope, Empire, and Jedi so wonderful were overlooked in favour of the digital effects that helped propel Avatar to mind-blowing success.

But while James Cameron understands (sort of) the benefits of CGI, Lucas was using because it was available to him. The thing about CGI is that it has no weight, it lacks texture and doesn't take up physical space, so it can be hard for actors to work with and play off something that's not actually there. And harder still for the audience to believe in what they're seeing because everything looks wrong. A great deal of progress has been made in this area since the prequels, but that only further reinforces what a total cock-up those movies were. Star Wars was ground breaking. Lucas innovated the crap out of that first movie and carried those innovations through the second and third. He had the chance to do so again with the prequels but he blew it.

In addition to overwraught visuals effects, the prequels lacked any kind of visual recall to the original films. Rather than taking place a long time ago in a galaxy far, far away, Phantom Menace, Attack of the Clones, and Revenge of the Sith, appeared to take place in some other galaxy in the far distant future. Lucas created an entire world, one with its own distinct look and feel, and while each new place we journeyed to in the original trilogy had its own visual flavour, they were all part of a single, unified system. That sense of visual unity was lost in the prequels, but Abrams recaptured the look and feel of the originals by blending practical effects and CGI. He took Lucas' original vision, beefed it up with some digital enhancements, and created something that looks like it truly belongs in the same galaxy as the OT.

Moving on to my second request, the be-its-own-movie stipulation, I have to admit to some disappointment. What I wanted was a film that had a clear beginning, middle, and end. A film like New Hope, that was one complete chapter in a larger tale that was being told. Force falls a bit short of the mark, I'm afraid. As a Star Wars nerd, I'm totally satisfied with the story on screen, but as a snooty cineaste, I wanted to watch a movie that ended, and ended well.

If we thought the 1980s were bad, the great enfranchisement of yesteryear doesn't hold a candle to the kind of lateral expansion that's happening now. Trilogy is the watchword, and while some have (thankfully) stalled out, it seems as if any and all genre pictures are greenlit for their potential sequels rather than on the strength of their single, solo stories. Movies today don't end, and the two-parter finales that capped off the Harry Potter, Twilight, and Hunger Games series are a perfect example of how greedy studios are and how inured we've become to this kind of gross manipulation. For all the good and goodwill Force has managed to accomplish, these deeds are undercut by the fact that the movie is incomplete.

As much as I hate to use Marvel as an example, each movie in that ever-expanding cinematic universe, can stand on its own; I frequently encourage people to skip over Captain America and go right to Winter Soldier. Likewise, Cap detractors don't need to see either film in order to enjoy The Avengers. Force had the opportunity to do something similar, to exist independently of what'll come next. Do you need to watch the OT before seeing Force? Yes, but since everybody's seen it already, that point is moot. Rather, no one walked out of New Hope knowing they'd have to wait two years to maybe get some closure, and Force should have offered all generations of Star Wars fans (and genre buffs in general) that same satisfaction.

Secondary to this point is the sense that I might have missed something, even before the movie began, although that's impossible given the EU I spent so much time in no longer "exists." Kylo Ren, Snoke, and Poe clearly have rich backstories, but with the exception of Kylo Ren, we never get a real sense of who these people are. One or two lines would have been enough to give some depth or dimension to these characters, but their presence in the film is treated with the same matter-of-factness as that of Wedge or Boba Fett. Sure, it works great for tertiary characters but Snoke and Poe aren't expendable. They help shape the narrative and drive the story forward, and for that reason, I needed to know more about them. Something as simple as Poe's a celebrated resistance pilot, or Snoke is the last Palpantine clone (*wink) would have helped make the movie that much more engaging.

So as not to end this review on a low note, let me say this: despite my misgivings about how this story is told, I am totally on board with Star Wars: The Force Awakens. Is it almost entirely a re-telling of New Hope? Yes. And that works in its favour. Lawrence Kasdan and Abrams found a way to give an awful nerd like me (almost) exactly what I wanted--which is to say something I already have--while presenting me with something new to fall in love with all over again.

Betwixt this and the latest Avod it makes me wish I had been in the right generation for SW but alas, I'm just too old. I remember leaving the theater after seeing SW and thinking that they really should use the new '70's technology to remake the original Flash Gordon and Buck Rogers serials I grew up watching (like those turned out better when they were finally remade!).

Better skip the next episode then, because we'll be talking Star Wars again.

Oh hell no, I enjoy the conversation too much to skip it.