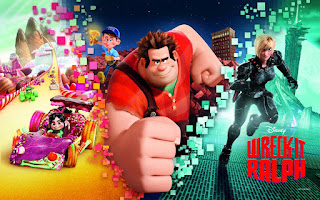 Let's get something out of the way early. I'm not much of a gamer. As such, I'm told I missed a lot of the references in Wreck-It Ralph. Even if that's true, not being intimately familiar with video games didn't prevent me from liking the movie or getting some of the jokes. At least the Q-Bert ones, at any rate.

The titular Ralph is the bad guy in Fix-It Felix, Jr., an old arcade game in which he wrecks an apartment building. When his game celebrates its 30th anniversary and Ralph is left out of the celebrations, he decides his days of exclusion are over. Determined to be accepted by his co-characters, Ralph crashes the party only to be antagonized by the building's residents. That night, Ralph sets out on journey to get a medal; if he returns to his game with a gold medal, he will be welcomed as a hero and no longer shunned.

Blending concepts encountered in Tron and Toy Story, Wreck-It Ralph is set inside the world of video games, specifically the games in Litwak's Arcade. After the arcade closes for the night, the game characters freely move about the various game worlds, with the central electric hub acting as Game Central—a kind of union station. But even though game characters can come and go from their games, and bitter enemies share drinks after hours, Ralph is still identified as a bad guy outside his game.

Wreck-It Ralph is very much a hero's journey, with a goal-oriented story that mimics most game plots. Ralph is called to adventure through his desire to be a hero, and must quest for a gold medal. Ralph gets the medal early, but looses it soon after. His new goal, to re-acquire his medal, is more challenging, but not impossible. After suffering a personal defeat, Ralph must quest once more, this time to redeem both himself and another game character.


To read the rest of this awesome review, click over to Screen-Shaped Eyes.
Posted by DM at 16:58