And Soon the Darkness

Weirdly, I'd already heard of And Soon the Darkness.  The original, anyway.  I'd seen a trailer for it at a friend's house.  Made fun of the trailer, is more accurate.  From what I could tell, the movie's about two girls who go on a bike ride and are followed around by some poncy asshole.

I was curious to see Karl Urban do ponce. 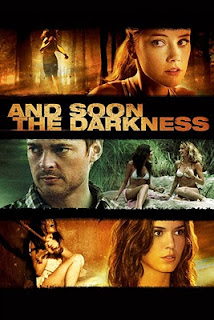 Stephanie and Ellie have ditched their bike tour and cycled around Argentina on their own.  After a spat, Steph rides off alone but when she returns to Ellie, Ellie isn't there.  Karl Urban is.  He offers to help Steph, but she would prefer to deal with the police.  The local policeman isn't very helpful and Steph eventually takes matters into her own hands, tracking Ellie down.  This course of action leads her back to Karl Urban, and, finally, Ellie.  And then things start going really badly for everyone.

As entertaining as this movie was, it is incredibly frustrating to watch.  It's well made and well acted and all that, but there's a certain...laziness...about the script.  I don't mean the movie lacks for excitement and suspense, I mean the story relies on cliches to keep the tension high.  The really frustrating part is that the film had a perfect opportunity to undermine convention while at the same time delivering anxious thrills.

A certain amount of plot is devoted to people making stupid decisions with unfortunate results.  The girls' situation is pretty dire--about as bad as it can get.  Although the film succeeds in being suspenseful, it would have been even more suspenseful and a great deal more satisfying if people made smart decisions with the same unfortunate results.

I will say this for And Soon the Darkness, for all its lazy writing, it did manage to surprise me from time to time.  I think this is the root of my criticism; the film doesn't hesitate to make a bold move, but the rest is just so hackneyed.  There's nothing so frustrating as wasted potential.
Posted by DM at 18:04

Well sorry for the frustration I caused. Oh well, at least it wasn't a total waste of time! Next time I will request something either so bad it's good or something actually good.