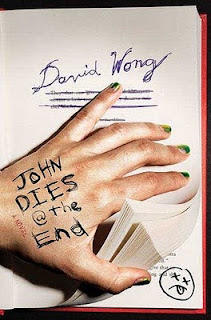 If David Wong is to be believed, his book began as a single story, published online late one night.  I have no reason to not believe him--he makes me laugh.  That one story eventually led to others and they were soon strung together and published as a tangible book.

Dave, the first-person narrator, is best friends with John and the two of them are suddenly and unwillingly drawn into a complicated world-domination plot helmed by monsters from another universe.

Given the book's genesis, it's not surprising to learn the story reads as if it were composed in fits and starts with little editing or oversight.  Do writers have oversight?  I don't even know.  My point is that John Dies at the End, while entertaining, doesn't really go anywhere.  Wong does a good job of building up to something, but in this reader's opinion, the big reveal wasn't all that revealing.  Motives are still shrouded in mystery, events lack explanation, and the larger story being told feels unfinished.

Or, quite possibly, Wong peaked too early.

That was supposed to be a dirty joke.  The book is full of dick jokes.  That's not a criticism.  Some of them are really very funny.

Most of the story is couched within an interview.  Dave is speaking with a reporter, telling him a wild tale of horror and adventure.  The reporter is skeptical, but as Dave tells his outlandish story, reporter and reader both are drawn into the plot.  A mysterious drug called soy sauce rockets you to a higher plane of existence, but most people who take it die--usually by explosion.  Dave and John don't explode and suffer the side-effect of being constantly attuned and receptive to paranormal activity.

Dave and John are special, but before they even begin to understand what that means, they and a handful of other soy sauce survivors are kidnapped as part of a larger plan to rip open a hole in the universe through which nightmares will pass.  Time and again Dave and John wisecrack their way to saving the world, to the point where it almost becomes hackneyed.  Wong's repetitive cycle of "weird shit, down time, weird shit" does well to impress upon the reader the magnitude of the world domination plot as well as the tenacity of the villain, but, like I said, the payoff comes to soon.

Nailed it that time!

Wong balances the ridiculous with the horrific, which lends the book a kind of in-between quality, caught betwixt comedy and something more serious.  The story isn't unbalanced, per say, but I hesitate to call it a horror-comedy or a comedy-horror because I simply don't know how to approach it.  I certainly enjoyed it, though.  The horror is imaginative, even balls-out crazy at times, and I always appreciate a story that attempts something new.

The book's been optioned and I'm curious to see how it's adapted.  Especially given all the nudity toward the end.
Posted by DM at 10:56

Uh, it's true that it started as a short story. It's what's now the prologue of the book. Why wouldn't that be true? His site was pretty popular, even back then.