I think my desk calendar is trying to tell me something.  It was a gift.  One of those tearaway calendars.  Vampire-themed.  Each morning I tear off a page, revealing the new day's date and vampire-related fact.

Fact: I'm learning a lot about vampires.
Another fact: It's all bullshit. 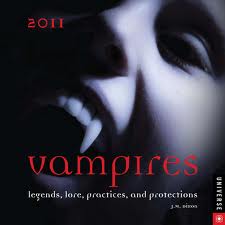 Okay, maybe not bullshit.  That's a bit harsh.  But certainly made up.  And I don't mean made up in the sense that vampires are fictitious to begin with.  The "facts" on my calendar are bits of folklore, re-tooled to lend more credence to vampire "truths" and histories.

For instance: Celtic Vampires (Part 1).  According to Celtic histories, the Sidhe (Celtic word for what today are called vampires) once dominated Ireland... The Tuatha De Denaan used their powers to put four curses upon the Sidhe.  On two seemed to have worked: one that would cause the light of day to scorch their skin and burn their eyes, and one that would allow no water to quench their thirst.

Here's the thing: Sidhe may be a people, or it may be a place.  The Sidhe might be the Tuatha De Danann, or their descendents--regardless, they're fairies.  Or they might be the mounds in which the fairies live.  One this is clear, though.  They're not vampires.

Nor was Vlad Dracul, for that matter.

And just in case I haven't yet sucked all the fun out vampires, a brief history lesson:  It's rather hard to pin down just where vampire folklore comes from.  Granted, the Hungarians do have their share of stories, but vampires were also invoked as a means to explain how and why corpses decay, and as agents of the plague.  Likewise, prophyria was often written off as vampirism.  When Bram Stoker wrote Dracula, Europe's vampire folklore was canonized. 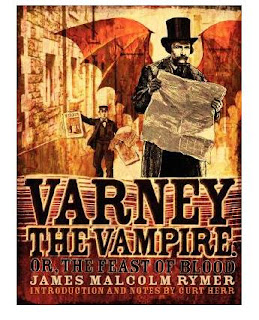 Required reading for any true vampire aficionado.
Vampire lore has grown so large that it can no longer be constrained by the "rules" that govern the original incarnation.  Anyone can say anything they want about vampires and all of it has to be given equal consideration.  It's an evolution of sorts, a public domain property free to be copied and altered, and new generations will either survive and reproduce, or fade into obscurity.

But as vampire fiction grows and changes, something else is happening outside the realms of film and literature.  And it's all being recorded on my calendar.

It's culture.  Vampire culture and society.  There is an organized group of individuals who believe they are vampires.  They may not actually drink blood, but they feed off the energies of humans, explaining that psychic energies are akin to blood in that both are essential parts of being.  Like any culture, these vampires have their own history (it's a pastiche of regional folklores), as well as a kind of ranked society with its own set of morals and tenets.

Like this one: Lifestyle. Be aware to set an example with the way you behave in the community.

That's good advice.  And not just for vampires.  We should, all of us, be mindful of the things we do and say.  Another page, I believe it was sometime back in March, told me to treat everyone with respect.  I'm assuming that includes non-kindred beings.

The anthropologist in me finds the whole thing kind of fascinating--the rise of a "vampire" culture within modern society.  But the armchair psychologist in me thinks its nothing more than a group of loners who never got over their "misunderstood" phase of adolescence. 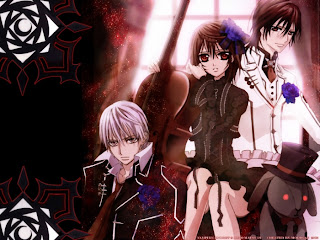 Or they just watched a lot of Vampire Knight.
My calendar with its fake vampire mysticism serves as a great introduction to contemporary cultural vampirism.  But why vampires?  Why are people identifying with bloodsucking monsters of lore?  To begin to answer that question we have to consider how vampires have changed over time, from nightmare monsters to figures of romance.  Humanized, contemporary vampires keep the monstrous side of their personalities in check.  Their extraordinary abilities and afflictions make them special.  No longer fearsome antagonists, vampires have transformed into reluctant, romantic heroes.  Weakness has been re-written as vulnerability, and their distinct otherness makes them special, as opposed to freaky.

For the teen or the self-identified outcast, modern vampire fiction offers a kind of emotional support and justification for their feelings of disconnectedness, and isolation.  It’s not a huge leap from identifying with vampires to believing one is a vampire, and it is possible that modern vampire culture grew up around transitional vampire fiction.

In addition to vampire social etiquette, my calendar also lists vampire books, movies, and music—songs about vampires.  The calendar doesn’t comment on the possible connection between vampire society and vampire pop culture, but I can’t help putting the two together.

The hard part seems to be determining where one ends and the other begins.

I'm sure the line does not bisect puppets.
Posted by DM at 23:56