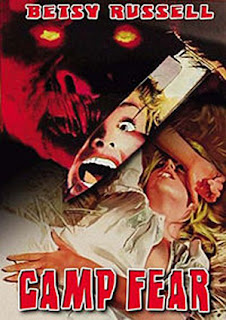 It's Spring Break.  That time of year when American undergrads kick off the responsibility of college education and hit the beach to drink and screw and forget where they put their sense of decency.  It's also a great time to get caught up in a horror movie scenario.

With that in mind, last night my friends and I took in a little film called Camp Fear.  And by "little" I mean, it's 80 minutes long and made with a video toaster, and by "took in" I mean "drank too much and slept through parts of it".

It's Spring Break and Professor Hotstuff is taking a handful of choice and nearly-nude coeds into the woods on an archaeological investigation of the local historic landscape.  The group barely makes to the hills when they're set upon by a biker gang and a very large druid.  The latter is the more immediate threat because the druid is looking for four women to sacrifice at his own personal Stonehenge in order to prevent the world from ending.

I think.  There's also a sea monster in the lake.

Somewhat unbelievably, Camp Fear suffers from overwriting.  And poor research, but that's not such a big surprise.  The fact that the world can be saved by four sacrifices is a  real problem for the plot because, on the one hand you don't want the women to die, but on the other hand, you really don't want the world to end.  Almost by accident, four people do end up dying thereby preventing the apocalypse, and this turn of events completely undermines the film's story.  I'm not entirely sure how it happens that the film manages to fulfill its premise by not actually accomplishing it's plot, but I'm not going to spend too much time worrying about it.

What is worrisome is the idea that a druid has a cuneiform tablet on which is written the apocalyptic prophesy.  And that a cultural anthropology undergrad can read it.  There is just so much wrong with that.  Not only does it violate well known culture histories, it also demonstrates a profound misunderstanding of what anthropologists actually do.

Oh yeah, and the movie takes an hour just to get the point where people start dying.

Did I forget to mention the Geiger counter and the Indian chief?
Posted by DM at 19:05

I like your take on this one. I watched it a while back as well and kept wishing it was an episode of Mystery Science Theater 3000. Those guys could have really had fun with this one.

They may be from our website, out of your rivals, through local mother & jumps or even global companies!