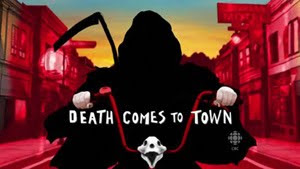 If you're Canadian then you know all about Kids In The Hall.  And if you're not Canadian then you probably still know about them because KITH rocks.  Way back in January, the Kids returned to TV after a 15-year absence to bring us an 8-part murder mystery set in small-town Ontario.

Shuckton is your average Ontario town--it's pretty and it kinda wishes it were a little bit bigger.  The day after the Mayor loses his Olympic bid, he's found shoved head-first into his mailbox, dead.  Who killed and mailed the Mayor, and why?  These are the questions that drive the show.  Well, the first one does, anyway.  No one's too concerned about motive because Shuckton is largely populated by morons.  The town abortionist gives away free kittens, the vet is a shyster, and the judge keeps losing his gavel.  Into this fray walks Death.  Clad in a leather vest and codpiece, Death checks into the No-Tell Motel and patiently waits for people to die so that he may "collect" their souls.

Sometimes off-putting, sometimes downright alienating, KITH's humour has never failed to entertain and they're just as outlandish now as they were back in the '90s. Full of off-colour jokes, political incorrectness, and ridiculous nonsense, Death Comes to Town combines KITH's collective creative genius into one preposterous plot.  Very different from Brain Candy, KITH's feature film from 1996, the mini-series pushes the CBC's relatively conservative limits.

When the Death Comes to Town aired on the CBC, it was well-received by TV audiences and critics in Canada.  Few people outside Canada saw it at the time, but the show has now been picked up by IFC is currently airing in the US.

If you're a fan of KITH, you'll want to check this one out.  Some of the show's most famous/beloved characters appear in the mini-series, including the two bumbling cops who have a larger role to play this time around.

Oh yeah, and I totally ate in the same restaurant as Scott Thompson while he was there.
Posted by DM at 22:07