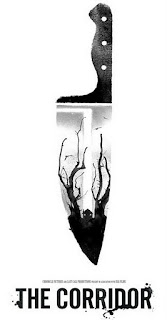 I turned to Mark. "I'm not entirely sure I understood the end," I said.
"I'm just glad he wasn't crazy," came the reply.
But he was crazy.  That's the thing.

Tyler went nuts the day his mom killed herself.  His friends found him hiding in the closet with a knife, ranting about open doors and keys and all kinds of crazy stuff that didn't make any sense.  One violent confrontation later, Chris and Everett have been injured, and Tyler's in the loony bin.  Year later, shortly after Tyler's release, the friends gather for a weekend of bonding.  They're staying at Tyler's cabin, where the memory of his mom, Pauline, hangs in the air.

Tyler is keen to mend fences, to put the past behind him, and to no be crazy anymore.  But a supernatural force  filed in the woods challenges his sanity.  Luckily, everyone can experience it, too.  The force field, which takes the shape of a rectangular box, opens up the men's minds and the more contact they have with the thing, the more open and inhibited they become.  Tyler is relatively unaffected because of his medication--pills meant to block out the crazy--but he's worried his friends will catch his mental illness.  His worry is justified as his buddies grow increasingly obsessive and violent.  As the problems within the cabin escalate, the supernatural box elongates, stretching into a corridor begging to be explored.

Is it a film about mental illness?  Possibly.  Is it a film about adulthood?  Probably.  Tyler is struggling to return to a normal life, and we learn his friends each have personal issues as well.  When the mystical qualities of the corridor lay bare everyone's secrets, Tyler's insanity isn't any worse than Jim's impotence, or Bobcat's depression, but his mind is a danger to others because of repressed memories.  These memories trigger the latent violence in everyone else as they act out their own pent-up feelings of dissatisfaction and unhappiness.

The Corridor isn't all subtext and metaphor, however.  The corridor is a very real presence and it's likely what drove Pauline over the edge all those years ago.  Blending sci-fi with straight drama, the film waffles between the fantastical and serious, and does an okay job balancing the two up to a point.  It's toward the end of its 98-minute running time that the film gives over entirely to its sci-fi element, and that's where it looses its narrative thread.  As the physical world seems to unravel down the length of the corridor, so too does the film's plot.  There's no reconciliation between the drama instigated by the the corridor's psychic properties and what happens at the end of the movie.

At least, none that Mark and I could figure out.  But the film won Best Canadian Feature at Fantasia and Best Screenplay at Fantastic Fest, so it's worth seeing.  Just keep an open mind.
Posted by DM at 20:33

I have just watched The Corridor and as the credits rolled I said, "I don't get it". I was happy to go on the journey, but the last 5 minutes needed to be clearer. It is bugging me. Maybe I'm thinking too hard.