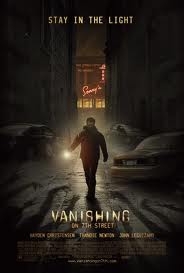 We're all a little bit afraid of the dark.

After seeing the trailer for Vanishing on 7th Street , I summed up the movie thus, "They meets the best part of Session 9".  I wasn't entirely wrong.  They, if you haven't seen it, is a movie about monsters that live in the dark.  It's not a great movie, but I like it.  I like it because I generally tend to like movies about mysterious, ineffable, and invisible threats.  Session 9 is another Brad Anderson movie, one that explores the human psyche and the roots of insanity.  My very favourite scene in the film takes place in a tunnel; a character who's afraid of the dark finds himself stuck underground as the lights go out, one at a time.  He runs for end of the tunnel, but he can't outrun the dark.  Combined, these two movies comment on our struggle with and primal fear of the unknown, represented in turns by darkness and mental instability.

Vanishing on 7th Street tackles these same themes but in a much more fatalistic way.  One day, out of nowhere, darkness descends and everyone disappears.  Anyone lucky enough to be near a light source that is not powered by a car or the electrical grid, is spared.  Three days later the few survivors have learned to stay in the light, but as the days grow shorter and batteries drain faster, it becomes increasingly difficult to stave off the darkness.

No one ever thinks to light a fire.  I don't know why.

Most of the movie's action is set inside a genny-powered bar.  While a handful of characters debate their next move, they take turns waxing philosophical about the dark.  Why is this happening?  What does it mean?  The film is short on answers, which is just fine with me, but Thandie Newton's religiosity grows tiresome--her character is a reformed addict, who found strength in god.  That's great for her, but as Hayden Christensen rightly points out, Thandie's "left behind" rantings are really irritating.

What's even more irritating is the film's inability to learn from its own script.  The movie makes reference to the "souls" that live in the dark.  We hear them sometimes, as their shadowy presence closes in--unintelligible whisperings in the night.  The problem is no explanation is offered to counter Thandie's religious theory.  Hayden Christiansen spits out the word "aliens" at one point, but he's just being facetious.  And John Leguizamo's story of being taken away to some mysterious place and then returned to earth is ultimately dismissed as the hallucinations of a man with a concussion.  The movie ends inside a church, no less, which only lends further support to Thandie's belief in the rapture.  Thing is, Vanishing on 7th Street is absolutely not about religion or god.  At least not a benevolent one.  We're warned to distrust any light source that is not our own, because the dark is tricky.  And the dark is, at all times in this movie, a malevolent force.

At times it feels like Anderson is trying to tap into the alienation and loneliness that permeated Kairo.  Only Kairo was about the unconnected or disconnected nature of human life at the hands of technology, and Vanishing on 7th Street is about...something that's not that.  There is a sense of alienation that underscores much of Vanishing, but it's an effect of the world being empty of people, and is not a comment on society.

Returning to what I mentioned at the start of this rambling investigation, Vanishing on 7th Street, does make an effort to push the mysterious nature of the creeping dark by referencing the lost colony on Roanoke. The film hints that what's happening now is just another mystery in a long history of unexplained disappearances.  Is it possible the very same thing happened on Roanoke over 200 years ago?  The film doesn't know, and it largely doesn't matter.  What does matter is the survivors at Sonny's Bar are running out of time.

As the dark encroaches on the light and the shadow people crowd in, the survivors repeat the mantra "I exist" in an effort to cling to their conscious presence in the world.  In the same way that Vanishing on 7th Street is not a comment on society, it's also not meant to be a metaphysical treatise on the nature of existence even though it could be read that way.  At its core the film is about fear and survival.  Death is inevitable, certainly, but it's not necessarily something to be afraid of.

There are worse fates waiting in the dark. 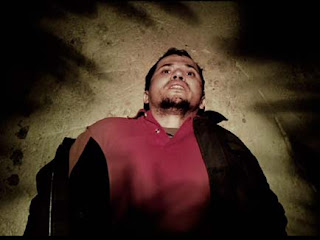